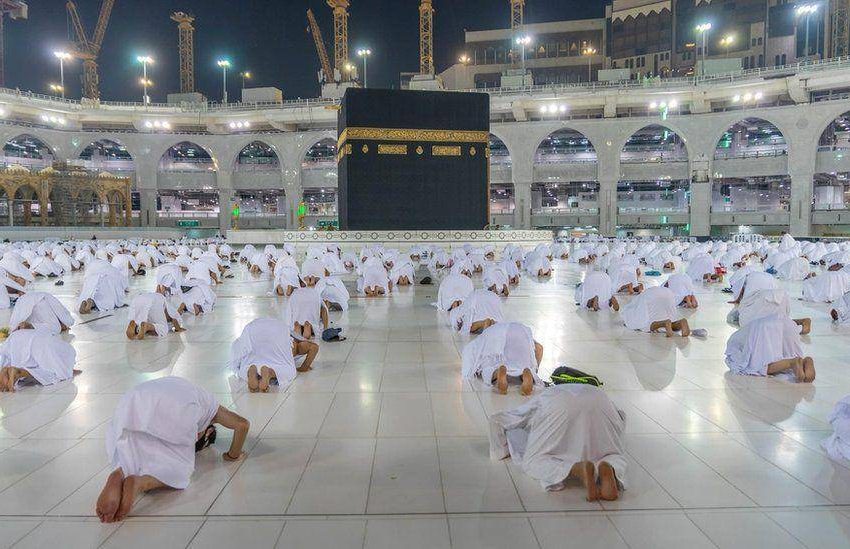 Having completed the Ramadan Umrah rites as prescribed by the Holy Prophet Mohammad (SAW), the first batch of Lagos State Ramadan Umrah (Lesser Hajj) pilgrims began their return journey home with effect from Monday, 2nd May, 2022.

The pilgrims, who left Nigeria for the Kingdom of Saudi Arabia in batches on the 18th of April, 2022, were accommodated in luxurious hotels both in Medina and Makkah from where they embarked on the rites of Umrah with the assistance of the officials of the Lagos State Muslim Pilgrims Welfare Board, Ulamah (Clerics) and Hajj Guides.

Addressing the pilgrims before departing their hotels for the King Abdul Azeez International Airport, Jeddah, the Commissioner for Home Affairs, Prince Anofiu Olanrewaju Elegushi, appreciated them for their good conduct throughout their stay in the Kingdom and for preserving the good virtues and enviable image of the State as its ambassadors.

Elegushi expressed gratitude, on behalf of the Governor, Mr. Babajide Olusola Sanwo-Olu and his deputy, Dr. Kadri Obafemi Hamzat, to the Almighty Allah for making the planning and execution of the journey seamless and stress-free.

Outlining the process of the trip, which included visa procurement, hotel accommodation, airlifting and feeding during the exercise as well as ensuring that all the pilgrims performed the Umrah rites hale and hearty without any medical challenge or death, Elegushi urged participants to reflect on the benefits of Umrah and impart it in their conduct and dealings with their families, friends and businesses back home.

On his part, the Chairman, Lagos State Muslim Pilgrims Welfare Board, Engr. Shakir Ayinde Gafar, said the pilgrims have further written her name in gold as worthy ambassadors of Lagos State, noting that their exemplary conduct proved to the entire world that its citizens are responsible and reliable.

Engr. Gafar maintained that as the number one State in Nigeria in Hajj and Umrah operations Lagos would continue to provide pilgrims with improved and quality service delivery, adding that nothing would be left untouched in its preparation for the forthcoming Hajj exercise.

No fewer than 156 pilgrims performed the 2022/1443 A. H. Ramadan Umrah with Lagos State and they are to be airlifted in line with the airlines’ schedule until everyone is brought back home.  The airlines are Emirates, Qatar and Egypt Air.

The Ramadan Umrah, which falls within the last 10 days of the Holy month of Ramadan, is a spiritual exercise that gives Muslims all over the world the opportunity to worship Allah as prescribed by Him and taught by the Holy Prophet.