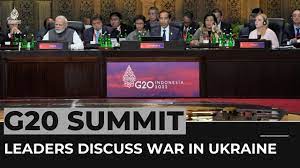 Leaders of the G20 major economies have made a declaration saying they “deplore in the strongest terms” Russia’s aggression against Ukraine.

The declaration said “most members strongly condemned the war in Ukraine and stressed it is causing immense human suffering and exacerbating existing fragilities in the global economy”.

It was approved by all members of the G20 bloc, three diplomatic sources told Reuters.

A German delegate said it was adopted without any changes from a draft released on Tuesday.

The declaration said there were “other views and different assessments of the situation and sanctions”.

It said international law must be upheld, the threat of the use of nuclear weapons was inadmissible, and welcomed the Black Sea grain initiative.

Members reaffirmed their commitment to avoid excessive exchange-rate volatility while recognising that “many currencies have moved significantly” this year.

Earlier, the day’s schedule at the summit on the Indonesian island of Bali was disrupted by an emergency meeting to discuss reports of a missile landing in Polish territory near Ukraine, killing two people.

President Joe Biden said after the meeting that the United States and its NATO allies were investigating the blast, but early information suggested it may not have been caused by a missile fired from Russia.

NATO member Poland said it had summoned Russia’s ambassador for an explanation, though Russia denied it was responsible.

Leaders from the G7 nations, who were all in Bali for the G20 summit, attended the discussion.

After the meeting, the G20 leaders, dressed in white shirts and some with baseball caps with the G20 logo, took part in a ceremony to plant mangrove saplings to signal the battle against climate change.