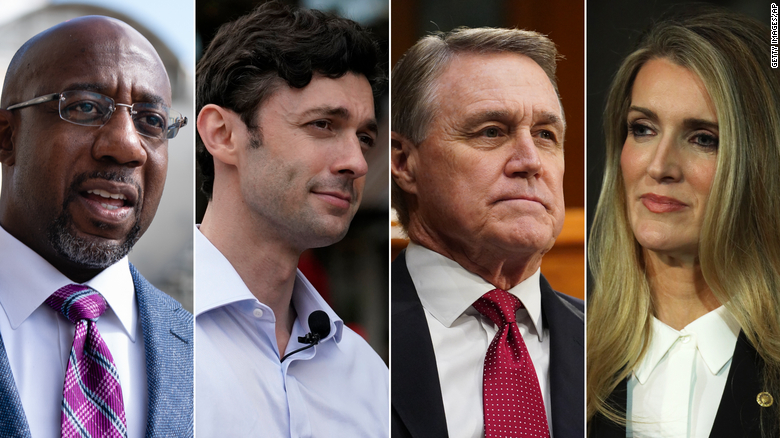 The US state of Georgia is going to the polls in a vote that will decide whether President-elect Joe Biden’s Democrats control the Senate.

Victory in the two runoff elections would give Mr Biden control over the whole of Congress and with it the power to push forward his progressive agenda.

Mr Biden said Georgians could shape the US for years to come.

Republican President Donald Trump told voters it was their “last chance to save the America that we love”.

None of the candidates reached the 50% needed to win outright in the elections in November, forcing Tuesday’s runoffs under Georgia’s election rules. Voting began at 07:00 (12:00 GMT).

What’s at stake in Georgia?

The vote will decide the balance of power in the US Senate.

The Republicans currently hold 52 of the 100 seats. If both Democrats win on Tuesday, the Senate will be evenly split, allowing incoming Democratic vice-president Kamala Harris the tie-breaking vote.

This would be crucial for pushing through Mr Biden’s agenda, including key issues such as health care and environmental regulations – issues with strong Republican opposition.

The Senate also has the power to approve or reject Mr Biden’s nominees for cabinet and judicial posts.

If Mr Ossoff and Mr Warnock both win, it will bring the White House, Senate and the House of Representatives under Democratic control for the first time since President Barack Obama’s election in 2008.

Voting should last about 12 hours, ending at 19:00 local time (midnight GMT), although all those still in line to vote will be allowed to do so. A state primary last June did not stop accepting ballots until past midnight.

Democrats are hoping for a large turnout and have been buoyed by the fact that more than three million Georgians have already cast their ballots – nearly 40% of the state’s registered voters. Early voting was a key benefit for Joe Biden in the presidential election.