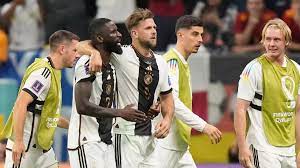 Substitute Niclas Fullkrug’s close-range strike late in the second half rescued Germany with a valuable 1-1 draw against Spain in a World Cup Group E showdown, a result which left the group still wide open.

Billed as a heavyweight battle between two giants of European football, this was a pacy, exciting, end-to-end 90 minutes which probably deserved more goals for two teams who have both previously lifted the World Cup.

Spain had the better of the first half on Sunday evening, looking the more likely to break the deadlock with the flair and style of their youngsters. A powerful seventh-minute effort from Dani Olmo was forced onto the crossbar by Germany’s Manuel Neuer.

Antonio Rudiger did find the net for Germany with a powerful headed free-kick conversion – but the goal was ruled offside by VAR.

Spain was rewarded for their creativity early in the second half. Substitute Alvaro Morata beat his marker and flicked the ball in at the near post past goalkeeper Neuer following a low cross from Jordi Alba in the 62nd minute to give Spain the lead.

Head coach Hanzi Flick rang the changes, swapping out three players. Just 13 minutes after coming on, Niclas Fullkrug equalised for the Germans in the 83rd minute, smashing home a loose ball inside the box.

From then until the six minutes of added time were complete, both teams had chances to win in a frantic finish, but had to settle for a draw.

“Germany have an amazing team, and I think it was an amazing game. [With these] two teams, it could have been a semifinal or a final of a World Cup,” Morata told BBC Sport after the game.

“The most important thing is to win, and tonight they scored an amazing goal, and we were unlucky not to have the win, but tomorrow we go back into training.”

The result was “fair, against a very tough Spanish side”, Germany’s Ilkay Gundogan told the BBC after the match.

“And now it’s all about the final game of the group. In a World Cup, you already know it’s going to be dramatic, full of ups and downs, and then the way Niclas [Fullkrug] scored – the finish was unbelievable, a typical number-nine, he stepped up when we needed [it].”

Their draw leaves Spain top of the group, needing just a point against Japan to guarantee a spot in the final 16 of the tournament.

Germany, who lost 2-1 in their opener against Japan, are at the bottom of the table on one point. They need to win against Costa Rica on Thursday and their hopes then depend on Japan losing. If Japan draw, it will all come down to goal difference.