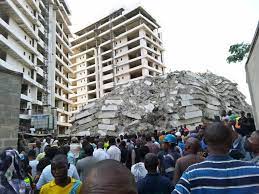 The combined efforts of the Lagos Rescue Unit (LRU), Lagos State Fire Service and Lagos State Ambulance Services (LASAMBUS) has saved the lives of at least three persons trapped in the collapsed 22-storey building on Gerrard Road, Ikoyi, while rescue operations are still ongoing.
The Deputy Governor of Lagos State, Dr. Kadri Obafemi Hamzat, in the company of other State functionaries, including the Commissioner for Physical Planning and Urban Development, Dr. Idris Salako; Commissioner for Special Duties, Mr. Bamgbose- Martins; Special Adviser on Urban Development, Mr. Ganiyu Adele Ayuba; Special Adviser, GIS and Physical Planning, Dr. Olajide Babatunde; Permanent Secretary, Ministry of Physical Planning and Urban Development, Mrs. Abiola Kosegbe as well as General Manager, Lagos State Emergency Management Agency (LASEMA), Dr. Femi Oke-Osanyintolu, were at the scene to muster help for people trapped in the collapsed building.
On arrival at the scene, the Deputy Governor instructed that immediate investigation should be conducted by government agencies in the built environment, just as he directed that the location be cordoned off to facilitate rescue efforts and prevent onlookers from moving within close proximity of the site.
As part of investigations, the General Manager of the Lagos State Building Control Agency, Arch. Gbolahan Oki was also at the scene to conduct an on-the-spot assessment of any likely damage to the surrounding structures within the vicinity.
A report of findings will be made public in due course.