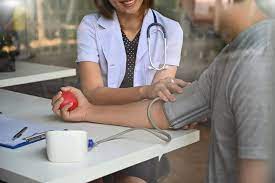 The Head, Department of Medicine at General Hospital, Ijede, Dr. Ogo-Oluwa Adeyemi, has described hypertension as persistently elevated blood pressure or the elevation of the blood pressure above a predetermined set-point, noting that its persistent elevation, if not well managed, can lead to the destruction of other organs in the body.

Speaking at an event organised by the hospital to mark the year 2021 World Hypertension Day, he explained that unmanaged hypertension leads to many complications, stressing that symptoms of such problems usually depend on the affected part of the body.

His words: “If it is the brain, we have a stroke; if it is the kidney, we have kidney failure; hypertension can also destroy the blood vessels and cause those parts of the body affected to decline and decay in function, which could also lead to amputation. Hypertension has also been known to accelerate the onset of dementia”.

The Clinician noted that hypertension affects everyone from infants to old age, adding that two major causes of hypertension are the Essential Hypertension (which the root cause is unknown to man e.g age) and the Modifiable Risk Factors like smoking, diet, obesity, diseases and so on.

Adeyemi maintained that youths between the ages of 15 and 18 should check their Blood Pressure (BP) every three to five years if the body system is functioning optimally, adults from 40 years and above should check quarterly, while those who have established BP should check their BP at least three times a week while on medication.

Research, according to him, reveals that hypertension affects over one billion people worldwide, noting that BP measurement could give wrong results if not well done.

He said, “Parameters like the right cuff size, positioning, mental state of the patient and physical exertion must all be put into consideration in order to have an accurate BP measurement”.

Emphasising that taking lots of fruits and vegetables, reduction in salt intake, reduction in fats and cholesterol, consuming the right diet, the use of medication as prescribed help in the control of hypertension, Adeyemi urged patients to heed advice by their doctors, avoid psychoactive substance abuse and take adequate rest.

He advocated that hypertension is not a disease being managed in the chemist or by a nurse but a multifactorial disease that needs expert care and management, maintaining that it cannot be managed in isolation because the doctors also check for co-morbidities which have to be managed and treated alongside high blood pressure.

Adeyemi, however, noted that hypertension is not a death sentence but a wake-up call to take better care of oneself, prevent complications by initiating prompt expert intervention and continuing with such care and management.