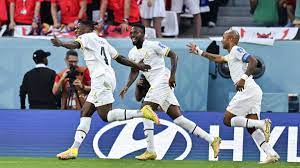 Ghana on Monday beat South Korea at World Cup in the match held in Doha, Qatar.

Ghana, who would have been eliminated by a defeat, led through first-half goals from Mohammed Salisu and Kudus.

Cho Gue-sung scored with two brilliant headers in a ferocious three-minute spell for South Korea, but that brace did not prove to be the catalyst for victory, as Kudus’ cool 68th-minute finish sealed it in Ghana’s favour.

But Ghana weathered the storm and edged in front before the half-hour mark, Salisu smashing in from close range after Jordan Ayew’s free-kick delivery caused havoc.

And the striker towered above the Ghana defence to equalise a few moments later.

But Ghana had the last laugh, as Kudus clinically found the bottom-left corner after Inaki Williams completely missed his kick, and South Korea never found a response, with head coach Paulo Bento shown a red card after the final whistle for arguing with the officials.

Regardless of what happens in the later game between Portugal and Uruguay, South Korea will need to beat the Selecao on matchday three, and they will probably need to do so by a few goals.