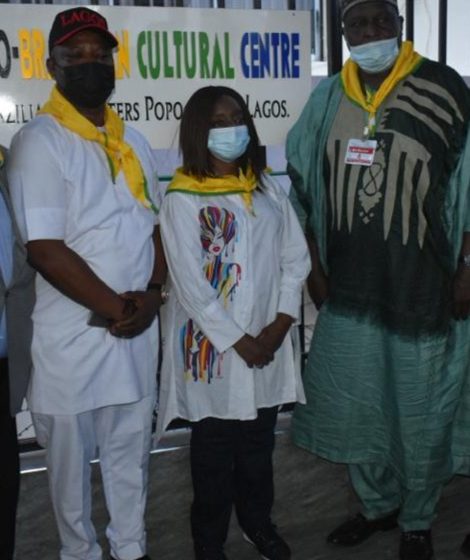 Speaking during the official opening of the Afro Brazilian Descendants Centre in Lagos, Dr. Sanwo-Olu also commended the efforts of the Honourable Minister of Information and Culture, Alhaji Lai Mohammed and his representative at the event, the Director-General, National Council for Arts and Culture (NCAC), Otunba Segun Runsewe, whom she recognised as the pivot of Nigeria’s cultural diplomacy.

The First Lady, who attended the event alongside the Special Adviser to the Governor on Tourism, Arts and Culture, Mr. Solomon Bonu, acknowledged the long historical relationship between Lagos and Brazil, saying that the initiative of the Afro-Brazilian Descendants Centre would further strengthen the age-long ties.

The Honourable Minister of Information and Culture, Alhaji Lai Mohammed, appreciated the support and recognition of Governor Babajide Sanwo-Olu in the ongoing efforts by Brazilian Descendants Association (BDA) in preserving the history and architecture of Afro-Brazilians in Lagos Island, stressing that the window of relationship which is being sustained by the thriving community would get Federal Government’s assistance, especially through the factoring of their iconic festival into Nigeria’s cultural festival calendar.

The Honourable Minister, whose message was delivered at the event by his representative, Otunba Runsewe, noted that the time has come to give the initiative an economic boost through cultural tourism.

He explained that the first generation of Nigerians, who were taken by the Portuguese slave merchants, left an enduring legacy on Yoruba culture which, today, has become a veritable platform of the cultural and historical relationship between Nigeria and Brazil.

On his part, Barrister Lawal Pedro, Chairman, Brazil Descendants Association and former Solicitor-General of Lagos State, explained that a museum of the community would be opened soon at Lagos State University as a way of encouraging studies and research of Brazil descendants in Lagos.

He noted that the centre is geared towards bringing close to the community, easy access to all information about historical narratives of Afro-Brazilian descendants in Lagos.