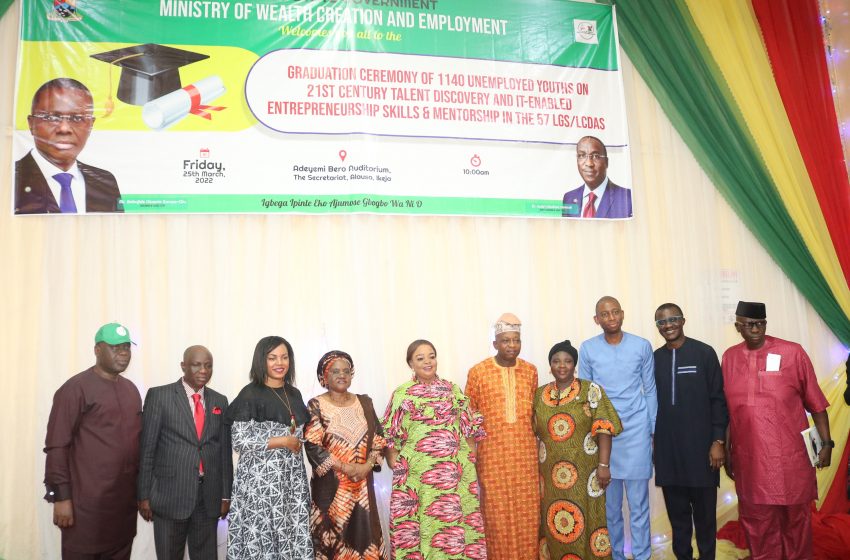 As a way of addressing digital literacy among youths and also creating wealth for the unemployed, the Lagos State Governor, Mr. Babajide Sanwo-Olu has presided over the graduation ceremony of 1140 newly trained youths, restating his administration’s commitment to empowering and equipping unemployed youths with digital entrepreneurship skills.

Speaking at a ceremony held at the Adeyemi-Bero Auditorium, Alausa, Ikeja, Governor Sanwo-Olu, who was represented by the Secretary to the State Government, Mrs. Folashade Jaji, disclosed that the move was in sync with his administration’s T.H.E.M.E.S Agenda, specifically the Education and Technology pillar.

He said that the training initiative tagged: “21st Century Talent Discovery and IT-Enabled Entrepreneurship Skills and Mentorship”, was organised by the Ministry of Wealth Creation and Employment, in conjunction with Messrs Digital Age Consulting, to promote digital literacy among youths while also exposing them to means of livelihood using the global space.

Sanwo-Olu said, “I commend the 1,140 youths that have participated in this intensive, cutting-edge training programme for taking a good step and taking advantage of the opportunities promised by the scheme organised with the intention of empowering and equipping unemployed youths in Lagos State with 21st century digital entrepreneurial and mentoring skills”.

“The reality we all must have seen today is that there is a gradual reduction in the number of available white-collar jobs. Young people must, therefore, stop seeing academic certificates as an end in itself, but rather a means to an end; the true essence of education is to enhance your ability to identify and harness your innate talents”, he added.

Earlier, the Commissioner for Wealth Creation and Employment, Mrs. Yetunde Arobieke said 20 best-talented youths have been selected among the trainees to become the Ministry’s wealth ambassadors, saying: “We have counselled the youths to identify their talents, passion and innate gifts and turn same into businesses by embarking on IT-enabled entrepreneurship training and mentorship for those with entrepreneurship dreams”.

“A website has been developed by the consultant to accommodate online officers to provide each beneficiary of the programme business access to the global market and every one of them today would be presented with a smartphone, courtesy of Mr. Governor”, she said.

The Permanent Secretary, Public Service Office, Mr. Samson Ajibade, who delivered a Goodwill Message on behalf of the Head of Service, Mr. Hakeem Muri-Okunola, told the graduands that the State Government has realised that failure to empower the youth could lead to untoward behaviour, hence the huge investment in capacity building and empowerment of the youth population by Governor Babajide Olusola Sanwo-Olu’s administration.

Also speaking, the Special Adviser to the Governor on Technology and Innovation, Mr. Tubosun Alake, alluded to the fact that Lagos State is now globally recognised for innovation, not only in the private sector but also in the public sector, noting that this development puts the trainees at an advantaged position to launch their skills before the international community.

Alake commended the desire to succeed, do better and make an impact among the young entrepreneurs, just as he challenged the trainees to assist in creating value for Lagos State through innovations, especially in the technological sector.

The CEO of Digital Age Consulting, Dr. Abimbola Ekunnusi, also acknowledged the way and manner in which the proposal for digital training was embraced by the State Government and how the leadership of the Ministry of Wealth Creation and Employment mobilised and sensitised the youths across the 20LGs and 37LCDAs.

Dr. Ekunnusi described the training as an extensive digital entrepreneurship programme with the best exposure that would help the participants navigate the 21st-century challenges as global champions who can compete favourably with their contemporaries across the world.