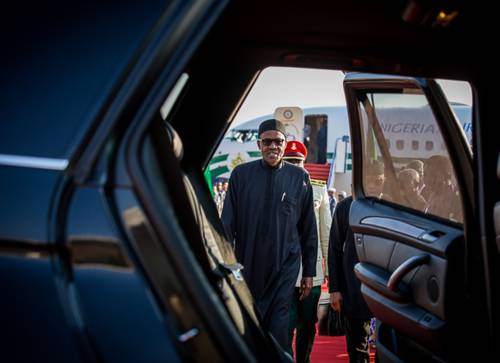 Shehu said the convoy, which was carrying a team of security guards as well as protocol and media officers, was on its way to Daura, Buhari’s hometown, to prepare for his visit when the attack took place.

“The attackers opened fire on the convoy from ambush positions but were repelled by the military, police and DSS personnel accompanying the convoy,” said the statement. “Two people in the convoy are receiving treatment for the minor injuries they suffered. All the other personnel, staff and vehicles made it safely to Daura.”

“The Presidency has described as sad and unwelcome the shooting incident near Dutsinma, Katsina State,” the statement added.

Buhari is scheduled to visit Katsina during the Sallah celebration, an Islamic festival, which will be held over the weekend.

Attackers also killed a police area commander and another officer in a different part of Katsina state, according to a statement issued on Tuesday by the state police spokesman, Gambo Isah.

“At about 1130 hours, a distress call was received that terrorists numbering over 300 on motorcycles, shooting sporadically with AK-47 rifles and general-purpose machine guns, ambushed ACP Aminu Umar, Area Commander, Dutsinma and team while [they were] on a clearance operation against recalcitrant bandits/terrorists in the Zakka forest, Safana LGA of Katsina state,” he said.

“The area commander and one other gallant officer lost their lives during a cross-exchange of gunfire,” the official said.

For more than a decade, gangs of bandits have run riot in vast swaths of northern Nigeria. In recent years, the violence caused by the groups has turned into a full-fledged crisis in the African country as they have been involved in the abduction, maiming, sexual violence, and killings of citizens across northern parts of the country.