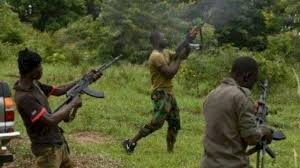 Gunmen in Nigeria’s northwestern Kaduna state kidnapped a number of students from the Federal College of Forestry college late on Thursday, a police spokesman and a state government official said on Friday.

The college is located few metres away from the Nigerian Defence Academy in the Mando area of Kaduna State.

As reported by ReportersB, confirming the incident, the spokesman of the Kaduna State Police Command, Mohammed Jalige said “the attackers invaded the college located at Mando area in the outskirts of Kaduna metropolis at about 3 am on Friday and abducted some students.”

He however said that the exact number of students abducted is uncertain.

The spokesman explained that security operatives were mobilized to the college upon hearing about the attack and were able to secure the remaining students.

He also said that investigation is ongoing to ascertain the actual number of students that were abducted with a view to track down the gunmen and rescue the victims.