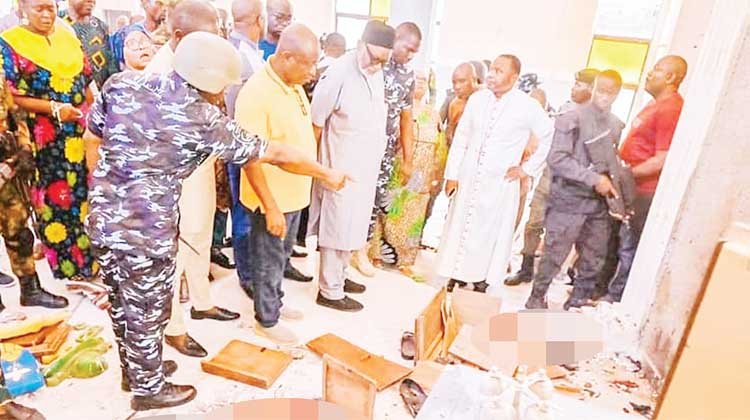 On Sunday, gunmen stormed Saint Francis Catholic Church, Owa-luwa Street, Owo, the headquarters of the Owo Local Government Area of Ondo State, causing chaos.
The attack on the church in Owo, the state governor’s birthplace, came just a week after Bishop Samuel Kanu-Uche, the Prelate of the Methodist Church of Nigeria, was kidnapped in Abia State by gunmen the bishop later identified as Fulani youths.
The shooters who assaulted the Catholic church arrived at the location, which is less than 200 meters from the Olowo of Owo’s palace, at 12 p.m. on Sunday, when the Sunday liturgy was wrapping up.

A 37-second video posted online showed some of the slain worshippers in a pool of blood.

Workers of the Federal Medical Centre and Saint Louis Hospital, both in Owo, where the dead and the injured were taken to, told one of our correspondents that a total of 35 people were brought in dead.

Both Reuters and Voice of America reported on Sunday that over 50 people were killed in the attack.

However, a resident of the area, who identified himself as Olabamiji, said the attack was carried out by gunmen who disguised as worshippers before entering the church’s premises.

According to him, immediately they entered the church premises, they threw an IED before shooting the congregants.

He said, “We saw them.  They didn’t cover their faces. Initially, we thought that they were going into the church for the service, not knowing that they were gunmen. Suddenly, we heard gunshots.  They directed the gun at everyone, particularly women and children.

“While the attack lasted, we did not see any security operative to confront the gunmen. We could not even count their number because everybody had to run for safety.”

It was a gory sight as dead bodies, both old and young, mostly women and children littered the church. Some bodies were dismembered with internal organs splashed on the temple ground.

After the dust settled, the throng of sympathisers expressed dismay at the poor response of police to their distress call, though a security source revealed that the two divisions, area command and mobile police in Owo do not have operational vehicles despite having a standby squad.

They disclosed that the invaders did not come with vehicles to carry out the operation but reportedly hijacked vehicles from motorists plying the Owo-Akure Road to escape.

Governor Oluwarotimi Akeredolu, who was at the APC National Presidential Convention in Abuja, returned home to take charge of some security measures.