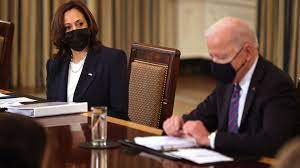 US President Joe Biden on Wednesday tasked Vice President Kamala Harris with tackling an influx of migrants on the Mexican border, aiming to take charge of a situation that has energized opponents of the new administration.

“I can think of nobody who is better qualified to do this,” Biden said at a White House meeting with Harris and other top officials as thousands flee violence in impoverished Central America.

“When she speaks, she speaks for me,” Biden said, adding: “I give you a tough job.”

Harris said there was “no question that this is a challenging situation.”

It marks the first time that Biden has assigned a specific portfolio to Harris, who is seen as representing a younger generation in the Democratic Party and has been constantly at his side since they entered office on January 20.

The administration also announced that the San Diego Convention Center would become the latest shelter for the rising number of migrant children and it sent a team to tour an existing facility in Texas.

The convention center will accommodate up to 1,400 children, said a spokesperson for the Office of Refugee Resettlement.

In a sign of shifting national focus, the San Diego center until recently had been repurposed for the Covid-19 pandemic as a homeless shelter that permits social distancing between beds.

Speaking earlier to CBS News, Harris acknowledged that the United States needed to speed up its processing of migrants’ asylum claims and care better for them.

“It’s a huge problem. I’m not going to pretend it’s not,” Harris said in the interview.

But she said that the administration, in office for less than 100 days, needed to repair a structure torn apart by former president Donald Trump, who rose to power on an aggressive anti-immigration agenda.

“We have to reconstruct it. It’s not going to happen overnight,” Harris said of the immigration system.

She also vowed a greater effort to address the “root causes” of the border situation — helping the so-called Northern Triangle of Guatemala, Honduras and Nicaragua so its people do not feel they need to flee.

The Washington Post, in an analysis looking at data, said there in fact has been no “surge” of migrants entering the United States, with recent numbers in line with seasonal norms before the pandemic.

But more of the migrants are children, officials say, and the border influx has provided Republicans a line of attack against Biden, who in his first weeks has succeeded in his promises to ramp up Covid vaccinations and to push through an economic package that offers relief to most Americans.