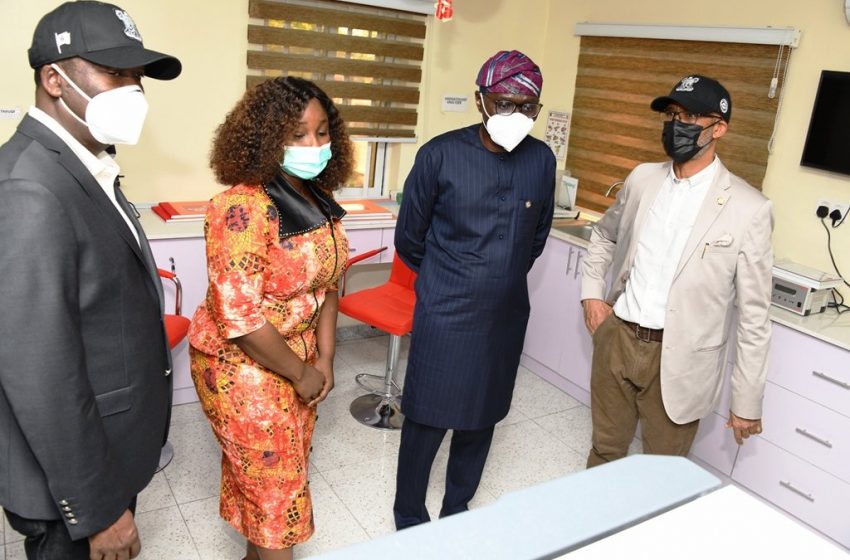 The Lagos State Governor, Mr. Babajide Sanwo-Olu, today commissioned some critical health infrastructure and performed groundbreaking for new ones as part of activities marking his second year anniversary in office and in fulfilment of his Greater Lagos agenda.

Projects launched by the Governor include the Oxygen Plant built in partnership with Total; Triage and Oxygen Centre, championed by Bill and Melinda Gates Foundation and Clinton Access Initiative; and the New Multi-purpose Lagos State Blood Transfusion Service Headquarters, all located inside Gbagada General Hospital.

Sanwo-Olu also performed a groundbreaking ceremony to signal the commencement of construction of new medical infrastructure projects, including; the new 150-bed Massey Street Children Hospital located in Adeniji-Adele area of Lagos Island and a New Doctors’ Quarters to be located inside the Gbagada General Hospital.

Speaking at the ground-breaking ceremony for the New Massey Street Children’s Hospital, the Governor said the construction of the facility, billed to be the biggest Children’s Hospital in Sub-Saharan Africa when completed, reflects his administration’s unwavering determination to bridge all gaps in the health sector.

He said: “As a responsive government, we identified the inadequacy of the present Massey Street Children’s Hospital to continue to meet the needs of a megacity with a population of 22 million people. The hospital was established in 1914 as the First General Outpatient Clinic and Referral Centre in Lagos State, and was converted to a full-fledged Pediatrics Hospital in 1961.

“As a result of the steady and increasing number of patients, who daily throng the hospital to access medical services, the capacity has been overstretched and must be urgently upgraded to provide quality service to patients.

“Guided by the Second Pillar of our T.H.E.M.E.S Agenda which encompasses Health and the Environment, we are rebuilding, remodelling and repositioning the Massey Children’s Hospital into a Seven-Storey, 150-bed, Ultra-Modern and fit-for-purpose Pediatrics Programme and Emergency General Hospital.”

According to the Governor, the new and well-equipped Massey Children’s Hospital, when completed, will provide secondary integrated care services and acute care to both inpatients and outpatients in line with international best practices and also, help to engender a significant reduction in infant and maternal mortality.

He added that the project, like others he had commissioned, are an integral part of the Greater Lagos Vision, adding that it presents another unique opportunity to advance the cause of Lagos State and improve the overall wellbeing of Lagosians.

“At the inception of this administration, we promised you lasting and audacious reforms in critical sectors, which we encapsulated in our T.HE.M.E.S Agenda.  I am proud to say that in the last two years, we have walked the talk, by not only initiating people-centred policies but by resiliently implementing projects that enhance the collective wellbeing of our people.

“We are honoured by the trust reposed in us and we will continue to seek new opportunities to respond to the infrastructure needs of Lagosians. This government is driven by the desire to build a formidable and equitable State with productive and healthy citizens.

“We firmly believe that, when completed, these projects will positively impact the lives of the good people and residents of Lagos State including those who work and do business on this part of Lagos Island”, Sanwo-Olu stated.

Also speaking at Gbagada General Hospital before launching completed medical infrastructure projects which include the Oxygen Plant, Oxygen Triage Centre, and the New Blood Transfusion Service Headquarters as well as groundbreaking for the proposed Doctors’ Quarters, the Governor said provision of quality healthcare that guarantees comfort and longevity is a fundamental pillar of his administration’s T.H.E.M.E.S Development Agenda.

Mr. Governor added that he will continue to implement audacious reforms in the health sector because the continued wellbeing of Lagosians is non-negotiable.

His words: “These facilities: the new Blood Transfusion Service Office, the Oxygen Plant and the Oxygen Triage Centre are vital projects that will scale up our most recent achievements in the healthcare sector.

“I am thrilled that these facilities are being commissioned alongside the groundbreaking of the Nigeria National Petroleum Corporation (NNPC)-Chevron Doctor’s 24-unit quarters, a corporate social responsibility project of both organisations”.

Sanwo-Olu noted that the Gbagada Oxygen and Triage Centre is an essential part of the COVID-19 Management Response Strategy and one of the 10 Permanent Triage and Oxygen Centres constructed across Lagos to provide swift Emergency Oxygen Therapy to those who require it.

“Each of these centres is equipped with beds, oxygen concentrators, thermometers, drugs, and consumables. The centres are managed by qualified medical personnel who have previously worked at the isolation centres across the State.

“Although these critical facilities were set up to effectively address the challenges posed by the COVID-19 pandemic, they have become a crucial part of our health infrastructure that will cater to health challenges that may not be related to COVID-19”, Sanwo-Olu stated.

The Governor also explained that the Blood Transfusion Service Office is also a critical facility that will enhance the capacity of medical personnel to manage emergency situations that require blood transfusion.

“With this new facility and through voluntary blood donation, we will increase our capacity to meet the estimated 220,000 units of blood required for a population of over 22 million people.

“As we prepare to celebrate the second anniversary of this administration, we are more determined than ever before to raise the standard and quality of our healthcare system to meet the healthcare needs of all Lagosians.

“We will continue to ensure that all Lagosians have access to quality healthcare, irrespective of their socio-economic status. Although there is still so much to be done, I am proud of the considerable progress we have made in the last two years”, Sanwo-Olu stated.