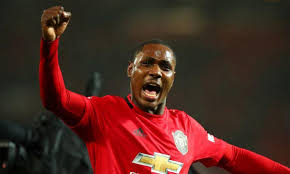 Odion Ighalo told ESPN he would like to stay at Manchester United beyond the end of the month and revealed he would also be interested in a move to Major League Soccer.

Ighalo’s loan from Chinese side Shanghai Shenhua is set to end on Jan. 31 after a year at Old Trafford. The Nigerian is waiting before making a decision on his next move but has said he would “love” the opportunity to play in the U.S.

“Today, I’m in Manchester but at the end of the month I don’t know where I’m going to be,” Ighalo told ESPN. “If it’s possible I’d like to stay here but if not I have to go.

“I have options. I wait for my agent. He is doing his job and I’m doing mine. At the end of the month, we have to decide what is best and we’ll take it. If it’s possible I’d like to play in MLS but I have to wait to see if it’s possible.

“The league is doing well and if the opportunity arises then I’d grab it with two hands.”

With the arrival of Edinson Cavani in the summer, it is unlikely United will extend Ighalo’s stay. But if he leaves at the end of the month, the 31-year-old said he will do so having fulfilled his dream of playing for the team he supported as a boy in Lagos.

“I never believed I’d play for United,” he said. “Where I come from, we fight because of United games.

“We quarrel. We argue. When my team hasn’t done well, I’ve cried. I grew my love for United since I was young and I’m the happiest man on Earth for my dream to come true. I’ve fulfilled my dream to play for Man United.”

Ighalo made a key contribution to Ole Gunnar Solskjaer’s team at the end of last season, scoring five goals in 19 appearances as United reached the semifinals of the FA Cup and Europa League, as well as finishing third in the Premier League to secure a return to the Champions League.

He has found opportunities harder to come by this term but it has not dented his appreciation for the chance to live out his dream.

“I’m a professional, I don’t make trouble and I don’t complain,” he said. “I just go to training and give my best.

“Lately I haven’t been playing much but it’s the coach’s decision.

“If I’m not in the team and give them 100 per cent support. The team is doing well and that’s the most important thing.”