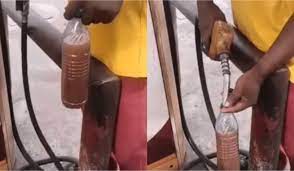 Petroleum marketers have explained that the long fuel queues, which recently surfaced in Lagos, Abuja, and some parts of the country are caused by the distribution of some adulterated products which has now been removed from the market.

President of the Independent Petroleum Marketers Association of Nigeria (IPMAN), Chinedu Okoronkwo, who disclosed this Wednesday, during an interview on Channels Television breakfast programme, Sunrise Daily, said the queues may persist due to the ripple effect of the initial distribution of the product.

“Off-spec petroleum was brought and people began to see some of the damages and the relevant authorities have come out plainly to explain what happened.

“In the system, any destruction of maybe two or three days can escalate the issue for up to one week. I can tell you that the product has been removed from the market but the ripples caused are still there. I believe before the end of this week, everything should normalise,” the IPMAN boss said.

He stressed that retailers have removed the contaminated petrol and the new products will soon be in full circulation.

“The new products are coming, you can see that some stations have started selling but the problem caused is humongous, that is why we are suffering the effect,” Okonronkwo added.

Also on the programme, the National President of the Petroleum Products Retail Outlets Owners Association of Nigeria (PETROAN), Billy Gillis-Harry said the effect of the adulterated fuel in circulation was mostly felt by the retailers.

“It’s quite a big problem. The retail outlets felt it the most. It’s not something that we know before, we got to know about it after the fault,” Gillis-Harry said.

He explained that the product when tested showed it is petrol but when exposed, it started having difficulties and it led to a public outcry.

He, however, said efforts are ongoing and the retailers are working with the authorities to ensure that the compromised product is no longer in circulation.

Following the resurgence of fuel queues in some parts of the country, the Federal Government on Tuesday announced that it has identified and subsequently dealt with the cause.

The CEO of the Nigerian Midstream and Downstream Petroleum Regulatory Agency, Farouk Ahmed, said methanol quantity above Nigeria’s specification was discovered in a supply chain, which has since been isolated.

Ahmed said while the quality control agencies of the government have swung into action, NNPC Limited and oil marketers have been directed to ensure a robust supply of petroleum products.

Meanwhile, some parts of the country have continued to witness heavy traffic as motorists jostle for fuel in long queues.