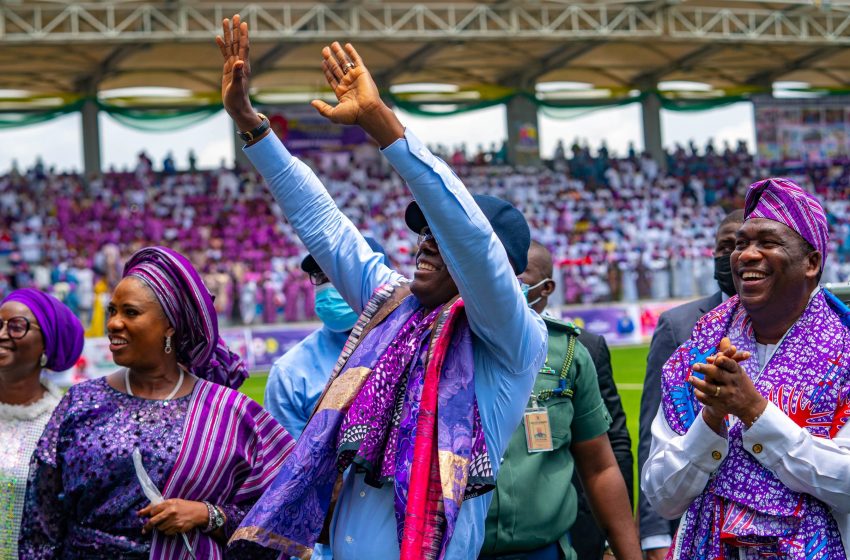 Lagos State Governor, Mr. Babajide Sanwo-Olu on Tuesday said his administration would continue to ensure gender equality in line with the theme of the 2022 International Women’s Day, which is “Gender Equality Today, for A Sustainable Development.”

With thirty-five percent women representation in government, Sanwo-Olu appreciated the invaluable contribution of women in making his administration’s goals realisable for a Greater Lagos through the T.H.E.M.E.S developmental Agenda.

Speaking at the 2022 International Women’s Day celebration held on Tuesday at the Mobolaji Johnson Arena, Onikan, Governor Sanwo-Olu, said the celebration is a “call to action and the stepping up of advocacy aimed at raising the awareness to what the society stands to gain if equal opportunities were provided for both the female and male genders to pursue their dreams and attain their potential.”

He said Lagos State today has one of the highest numbers of women in any State cabinet in the country, noting that the State can also boast of more women than men as judges, Permanent Secretaries and heads of government agencies and parastatals.

“In Lagos State, our commitment to this yearly celebration reflects our belief in the critical role our women must play and are playing side by side with the men.

“As I address you today, I can attest to the invaluable contributions that our women are making to the attainment of the goals and objectives of this administration, as encapsulated in the T.H.E.M.E.S development agenda.

“Lagos State today has one of the highest numbers of women in any State Cabinet in the country. That was and remains a deliberate decision. We are a Center of Excellence, and we will demonstrate this in every facet of what we do,” he said.

Governor Sanwo-Olu said Lagos, in line with government policies and programmes has continuously demonstrated its seriousness about improving the quality of the lives of women, noting that Lagos was a national pioneer in the introduction of a six-month fully paid maternity leave, and paternity leave to allow fathers work-free time to support their partners after childbirth.

He said his administration in the last 34 months, has remained faithful to its promise to improve the socio-economic status of women by expanding the representation of women in government, empowering women and building various programmes and policies that are being faithfully implemented.

In her goodwill message, the Lagos State First Lady, Dr. Ibijoke Sanwo-Olu who had earlier led a protest rally to the State Assembly, against the recent rejection of some gender bills by the National Assembly, urged Nigerian women to remain steadfast and resolute in demanding an end to acts of bias and discrimination.

She commended Governor Sanwo-Olu, who she described as champion of the ‘He for She’ Campaign and Advocate for gender equality, for Lagos State Government zero tolerance for all forms of Gender-Based violence, child marriages, sexual harassment and harmful practices against women and girls.

“As we celebrate International Women’s Day today, I wish to encourage all our women to strive and be the best in their chosen fields as this will lead to success and make them stand out even amongst their male counterparts. By so doing, more women will get to power and occupy better positions at all levels of Governance,” she said.

Dr. Sanwo-Olu who also spoke on the death of Miss Oluwabamise Ayanwole who went missing after boarding a BRT and was later found dead, described the development as sad, shocking, and devastating and called for one minute of silence in honour of the deceased.

“Let us give one-minute silence for Oluwabamise Ayanwole, the young lady that was gruesomely murdered. Lagos State condemns ritual killings. It is not acceptable. We pray that this would be the last time that we will hear this kind of bad news in Jesus name,” she prayed.

Also speaking, the Commissioner for Women and Poverty Alleviation, Mrs. Bolaji Dada, said Governor Sanwo-Olu is very passionate about the plight of the women in Lagos State.

She spoke on some of the achievements of the Babajide Sanwo-Olu administration to empower women and youth in Lagos State, noting that thousands of people have benefitted in different skills from the established 19 Skills Acquisition centres across the State where no fewer than 20 vocations are taught free of charge.

Dada also encouraged women in Lagos state, Nigeria and all over the world to avail themselves of various opportunities to become empowered, self-reliant, self-confident, even as women strive to attain leadership positions across the world.