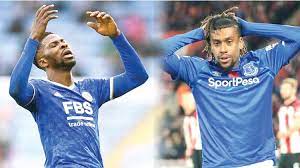 Super Eagles star Joe Aribo came close to scoring his second goal of the season, but he was denied by David De Gea as Southampton suffered a narrow 1-0 loss in their Premier League clash against Manchester United at St Mary’s on Saturday afternoon.

The Nigerian international’s superb header was pushed away by De Gea in the 66th minute and it turned out to be Southampton’s last real chance of the game as United held on for a vital win.

Aribo completed 85% of his passes, including one key pass. He also won six duels out of 12, although his performance was not enough to give Southampton the win over Ten Hag’s men.

Bruno Fernandes scored the winning goal for the visitors five minutes before the hour mark.

Everton failed to register their first Premier League win of the season thanks to a late Vitaly Janelt equaliser in a 1-1 draw at the Brentford Community Stadium, which saw the Toffees’ winless streak away to Brentford, which dates back to 1952, further extended.

Super Eagles midfielders Alex Iwobi and Frank Onyeka were offered contrasting roles in the game as Iwobi featured for Frank Lampard’s men while Onyeka, watched on from the sidelines.

Earlier in the week, Iwobi was recognized for his brilliance as he made the Carabao Cup team of the round of 32 but he was caught ball-watching and didn’t react to defend Janelt in the build-up to the equalizer.

The midfielder extended his goal drought in the EPL to 163 days.

Super Eagles stars Kelechi Iheanacho and Wilfred Ndidi came off the bench for Leicester City, but the Foxes suffered a 2-1 loss to Chelsea in their Premier League clash on Saturday afternoon.

Iheanacho and Ndidi did not start the game as Leicester manager Brendan Rodgers went with a 4-5-1 formation, with Jamie Vardy leading the line.

However, the Nigerians were unable to help the away side find the equaliser despite playing against ten men as Chelsea held on for their second win of the season.