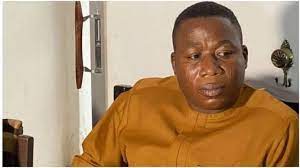 After 53 days in the custody of the Department of State Services, four of the 12 aides of embattled Yoruba Nation agitator, Sunday Adeyemo aka Sunday Igboho, are set to taste freedom again as Justice Obiora Egwuatu of the Federal High Court, Abuja on Monday signed their Release Order.

The detainees’ lawyer, Pelumi Olajengbesi, confirmed the development to our correspondent on Monday.

He said the judge could not sign the Release Order of the other eight detainees because three of the sureties withdrew before concluding the process of perfecting the bail conditions of his clients.

Olajengbesi, however, expressed optimism that the three sureties that pulled out would be replaced and the judge would sign their Release Order too.

The lawyer also urged the DSS to comply with the court order and release his clients immediately.

Recall that the DSS had approached a Court of Appeal sitting in Abuja to revoke the bail earlier granted by the Federal High Court in Abuja to the contested four — Babatunde, Shittu, Oyetunji and Sunday.

The secret police had expressed strong dissatisfaction against the ruling of Justice Egwuatu on August 4, 2021, granting bail to all the detainees, against the objection of the DSS lawyer that Babatunde, Shittu, Oyetunji and Sunday should not be granted bail.

While Awo did not oppose the bail of the other eight, he had said investigations revealed that the four contested detainees — Babatunde, Shittu, Oyetunji and Sunday — were heavily involved in the alleged offence of arms stockpiling and other criminal activities of their boss, Igboho.

But Justice Egwuatu had on August 4 admitted all the 12 applicants to bail including Babatunde, Shittu, Oyetunji and Sunday.

The court had categorised the bail granted to the applicants into two:

Eight of the detainees were admitted to bail in the sum of N5m, two sureties each resident in Abuja, with evidence of two years’ tax payment.

The remaining four – whose bail the DSS opposed – had their bail terms in the sum of N10m, two sureties each resident in Abuja with one of them being a civil servant in a Federal Government ministry or any of its agencies with grade-level not less than 12.

The 24 sureties had been secured last week but the presiding judge who was to sign their Release Order was said to have travelled abroad.

All the detainees were arrested around 1am on July 1, 2021, when the DSS “raided” Igboho’s Ibadan residence in a Gestapo style.

The secret police also said its operatives killed two other associates of the activist in a “gun duel.”

The 12 detainees had approached the court to seek their release.

Igboho, wanted by the DSS, has been in detention in Cotonou, Benin Republic, since July 19, 2021 when he was arrested at an airport as he tried to board a Germany-bound flight.