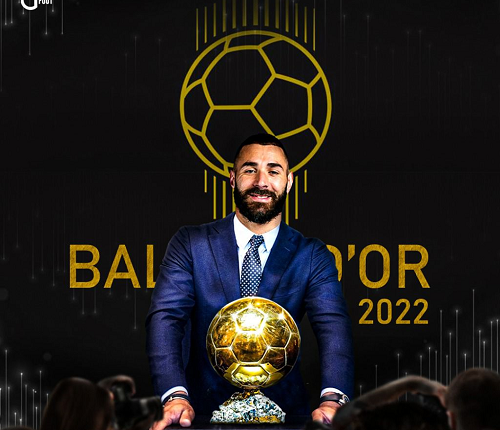 Karim Benzema was announced as the winner of the 2022 Ballon d’Or yesterday, after an incredible season with Real Madrid in which he won the Champions League and La Liga title.
Benzema was absolutely integral to Real’s success at home and in Europe and has been the odds-on favourite to be named the best player in the world, even before the shortlist for the title was revealed by France Football.
The 34-year-old beat Sadio Mane and Kevin de Bruyne into second and third, with Robert Lewandowski and Mohamed Salah rounding out the top five, after the result was leaked earlier in the day.
As well as the forward’s success, his teammate Thibaut Courtois was named as the best goalkeeper in the world, winning the Yashin Trophy.

La Liga players had a clean sweep of the main awards, as Gavi was named as the Kopa Trophy winner and Barcelona Women’s star Alexia Putellas was named as the Ballon d’Or Feminin winner.
This year is the first time that the award was handed out for success by season, rather than calendar year, meaning the upcoming World Cup was never going to count towards the winner.
Benzema scored back-to-back hat-tricks in the Champions League last 16 and quarter finals, against PSG and Chelsea, respectively, as his side progressed through the knockout rounds.