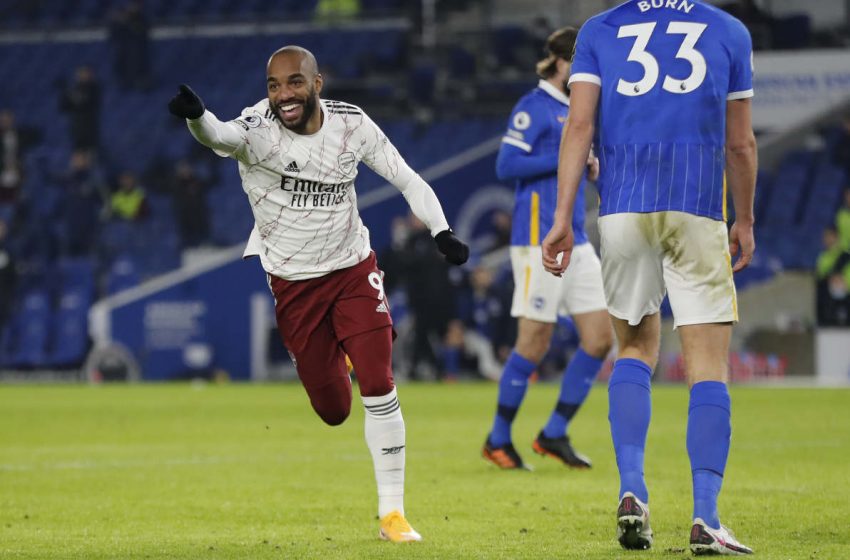 Alexandre Lacazette came off the bench and scored with his first chance as Arsenal won 1-0 at Brighton on Tuesday to take some pressure off coach Mikel Arteta with a second straight victory.

Lacazette had just come on when Bukayo Saka turned from inside his own half and made a superb run down the right before pulling the ball back to him. Lacazette took one touch to control the ball just inside the penalty area before driving a shot inside the right post in the 66th minute.

This is what all the managers dream of, to bring people from the bench to win you the game like he’s done,” Arteta said. “It was a great move from Bukayo first to create the action that he did. Apart from the finish, it was his (Lacazette’s) movement, the counter move that he made to create the space for himself. It was a brilliant goal.”

Lacazette scored 29 seconds after entering the field. Arsenal moved up to 13th place and a relieved Arteta hugged his assistants at the final whistle.

I said this week that winning is the best medicine,” Arteta said. “For sure this one is going to make us (feel) really good. I think it was a convincing win.”

He can also thank Lacazette.

It was his second straight goal after scoring a penalty in the 3-1 win against Chelsea on Saturday, where defeat may have cost Arteta his job.

Arsenal started sluggishly against Brighton but improved considerably after the break.

“It was a tricky game, very different from the Chelsea game,” Arteta said. “It took us a while for us to understand how we had to attack this block. But we talked about it, we came out (in the second half) and created four or five big chances straight away, and scored a really good goal.”

Lacazette was replaced as lone striker by Pierre-Emerick Aubameyang, who has been short of the form which made him arguably the league’s most dangerous striker last season.