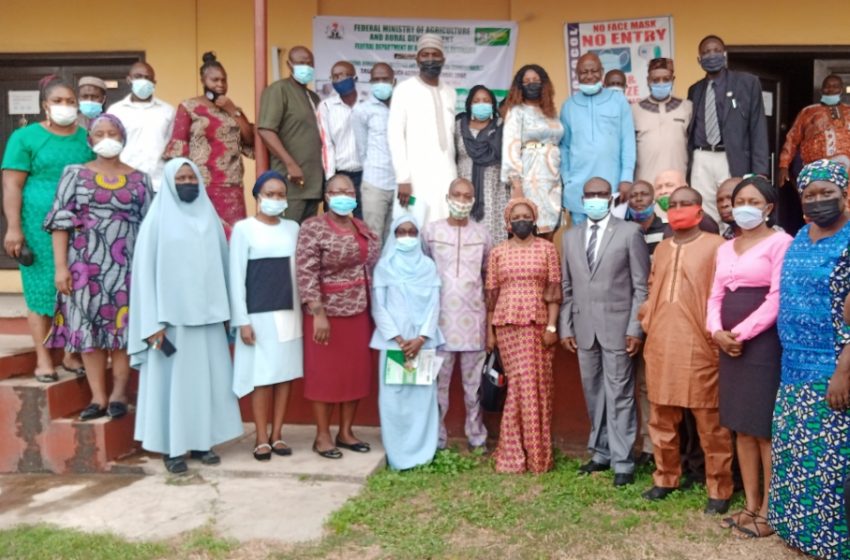 Lagos State Government says it would continue to prioritize and place more importance on its extension officers to ensure that they are able to better help farmers to increase their yields and enhance productivity.

The State Commissioner for Agriculture, Ms. Abisola Olusanya gave the assurance in Lagos today when she declared open a 5-Day Training Programme for Extension Agents in Lagos State a collaborative initiative of the Lagos State Agricultural Development Authority, (LSADA) and the Federal Ministry of Agriculture and Rural Development.

Olusanya described the training of the extension agents as a boost for the food security initiative of the State Government adding that extension officers as teachers of farmers needed to be prioritized and motivated the more.

The Commissioner stated that extension officers had been relegated for far too long bearing in mind the kind of work they do by teaching farmers the best practices and technologies to be employed in order to enhance the productivity of farmers.

According to her, the narrative would change going forward and agricultural extension officers would begin to enjoy motivation, encouragement and incentives from the State to compensate for all the work they do.

She commended the Federal Ministry of Agriculture for the partnership with the State Government in putting together the 5-Day training programme for the extension workers in the State.

“I see the extension agents as teachers of the farmers, meaning we have to do so much more around encouraging them, motivating them to ensure that they are able to help our farmers in terms of increasing yields and enhance productivity, and that we have a more food secured Nigeria and more food secured Lagos.

“But I think that a lot needs to be done for the extension agents that we have. I honestly don’t see so much motivation. It’s not a function of saying that from a place of criticism, but it’s coming from a place of reality. During the lockdown, so much focus was put on teachers by the government to ensure that they do not suffer as schools were shut down and income was not coming in.

“But our farmers and our farming communities suffered huge losses, meaning that the impact of the lockdown would have been worse on extension agents and officers. Who thought about that? It is about time that we begin to move with one voice and begin to show ourselves more in the light that we want to be seen. That narrative needs to change going forward,” Olusanya noted.

She disclosed that the duties of agricultural extension agents could not be overemphasized stating that they were not just expected to teach farmers about the latest practices and technologies required to improve their productivity, they are also to help farmers understand market prices.

Olusanya said that Lagos could not afford to continue to be dependent on other States for her food supplies adding that it was just a matter of time before trouble broke out if anything goes wrong with the supply chain, hence the need to look inward and start growing her own food which highlights the importance of extension officers the more.

She stated that for extension officers to do this, there must be motivation and empowerment for them hence going forward, she called for more interventions for them.

“As extension officers, you are not just expected to teach the farmers about the latest practices and technologies required to improve their productivity, you are also to help the farmers understand market prices. So essentially, you are also teaching them business because it’s not just about producing, the end result is money.

“For you to do this, there must be motivation and empowerment for our extension workers. So going forward, we need to see more interventions. I realize that we have fallen short in terms of welfare and empowerment for extension officers, we promise to do better and we hope that this is the beginning of better things to come,” the Commissioner averred.

Earlier, the Permanent Secretary, Federal Ministry of Agriculture and Rural Development, Mr. Ernest Afolabi Umakhihe noted that noticeable declining number and low skills have hampered the adoption of best practices and new innovations in the agricultural sector as evident in
the resultant low productivity and lack of adherence to standards causing rejection of Nigerian produce aboard.

Represented by Lagos State Coordinator for the agric extension agent training, Mrs. Olayinka Akeredolu, the Permanent Secretary revealed that the determination of the government to revitalize agricultural extension services in Nigeria will help farmers and value chain actors to make effective use of productive forces and advances in information technology to improve the livelihoods of rural populations, create jobs and promote sustainable agricultural and socio-economic development of the country.

He averred that the only way this can be achieved is to re-position the agricultural system through training, provision of equipment and tools as well as funding to carry out their primary mandate and responsibilities to farmers.

In the same vein, the Permanent Secretary, Lagos State Ministry of Agriculture, Mr. Hakeen Adeniji urged the beneficiaries of the training to grab the opportunity provided by both the State and Federal Governments through the exposure to modern technology that will help enhance food production in the State.

He reminded the trainees that the expectations of the masses are now higher with the introduction of latest technology, urging them to incorporate the use of modern technologies to make their work easier and faster.