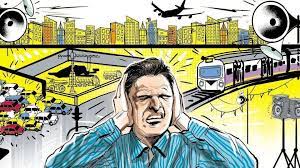 The Lagos State Government on Tuesday banned the use of all forms of amplifiers at all motor parks across the State, warning that violators will be arrested and made to face the full wrath of the law.

The Special Adviser on Transportation, Mr. Oluwatoyin Fayinka stated this during a joint press briefing held in conjunction with the Lagos State Environmental Protection Agency (LASEPA), to enlighten the public about steps being taken to curb the menace of noise pollution in all Lagos Motor Parks/Garages.

Fayinka lamented the indiscriminate use of megaphones and speakers to attract passengers at Motor Parks, stressing that defaulting motor parks would also be shut, while those caught using noise generating devices within the motor parks would be sanctioned.

His words: “This new directive is effective from today; any motor park found to be using amplifiers or any noise-making device is culpable and must be ready to face the consequences. The park monitoring committee has been mandated to monitor motor parks across the State for total compliance and enforcement. This is to restore sanity and entrench the right of other Lagosians to a noiseless environment”.

In his address, the Permanent Secretary, Ministry of the Environment and Water Resources, Dr. Tajudeen Omobolaji Gaji, stated that noise pollution is an unwanted sound in excess of the permissible limits, which has become prevalent in the Lagos environment.

According to him, constant exposure to noise pollution is causing a lot of stress for residents in addition to severe health implications such as hearing loss and other ailments that are detrimental to human health.

Noting that noise pollution is the most prevalent among the complaints received by the government annually as it accounts for about 75% of total grievances, Gaji stated that major sources of noise pollution in Lagos State are commercial vehicles, religious buildings, commercial enterprises, industries, entertainment facilities and power generating sets amongst others.

He disclosed further that the result of a survey conducted after the State government organised a free hearing test for road transport workers during the Y2021 ‘Noiseless Lagos’ campaign at Biode Motor Park, Ojota, revealed that a high percentage of hearing loss among the subjects were unknown to them.

Gaji pointed out that the outcome of the study is of great concern to everyone, eliciting an urgent need for intervention on the part of the State Government through the ban on the use of speakers in garages and motor parks in Lagos State.

In her contribution, the General Manager of LASEPA, Dr. Dolapo Fasawe, reiterated that no motor park is allowed from Tuesday, the 8th of February, 2022, to use amplifiers or other noise-making devices to call passengers or advertise goods within the State.

She said: “Section 177 of the Lagos State Environmental Management and Protection Law 2017 prohibits the use of public address system or loudspeaker to solicit for passengers or advertise the sale of goods at parks, markets and public places”.

Dr. Fasawe added that there is a specified amount of decibel of noise required in the daytime and at night, therefore, residents should guide their actions in line with the directive of the State government.