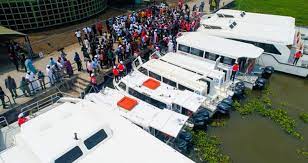 In order to boost water transportation in the State, the Lagos State Government has opened up four new navigable ferry routes to complement existing routes in the last one year.

This was disclosed by the Commissioner for Waterfront Infrastructure Development, Arc. Ahmed Kabiru Abdullahi at the annual Ministerial Press Briefing in commemoration of the second year in office of Governor Babajide Sanwo-Olu’s administration.

According to the Commissioner, the State Government is mindful of the importance of good ferry routes for safe and successful water transportation, which necessitated the Government’s continuous opening of new water routes to complement the existing ones.

He noted that part of the Ministry’s mandate is the provision of navigable ferry routes in Lagos waters for smooth sailing of bigger boats, hence the need for channelization of all identifiable ferry routes in the State to improve water transportation.

Arc. Abdullahi added that with the new routes more people are now embracing water transportation business and travels which would, in turn, improve commercial activities in those areas, save travel time and improve the general wellbeing of the people

To further improve safety on the waterways and also free the waterways of wreckage and debris, prevent erosion and degradation of the shorelines, the Commissioner said the State Government, through his Ministry, has removed four abandoned wrecked ships, debris and unwanted objects found on the waterways.

He added that 15 new reinforced concrete jetties located at various riverine areas of the State would also be commissioned for the use of the citizens of the State before the end of the year to further boost the water transportation system.

The Commissioner, therefore, urged Lagosians to avail themselves of the opportunities provided by the Government and make use of all the water infrastructure available for transportation.