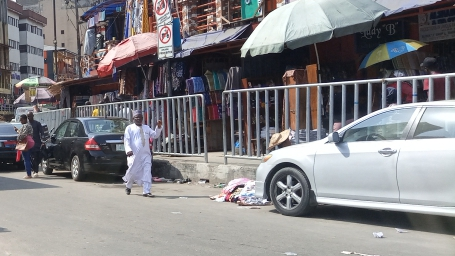 The Special Adviser to the Lagos State Governor on Central Business Districts, Mr. Olugbenga Oyerinde, on Wednesday, warned miscreants, hoodlums and vandals, who are in the habit of cutting and vandalising iron barriers, railings and other government road infrastructures, to desist or face prosecution.

Oyerinde gave the warning while supervising the erection of iron barriers and railings on the final stretch of both sides from Tinubu to Idumota in the Lagos Island business district. He decried the huge loss caused by the vandals destroying government property, cautioning business owners, traders and residents to be vigilant and security conscious.

“I must warn all vandals and thieves carting away iron railings and other road infrastructure to beware of further action as strict surveillance will be ensured and anyone caught in this despicable act will face the full wrath of the law”, he said.

The Special Adviser noted that the iron barriers will prevent the spillage of traders onto the roads and streets, as well as prevent trading on walkways and drainage alignments within the business district.

He observed that traffic situation within the area after the erection of the iron barriers has improved tremendously as vehicles and shoppers now move freely without hindrances from wares displayed on the roads by street traders.

While advising owners of businesses and shops to guard the newly erected iron railings and other government infrastructure within their business premises, the Special Adviser cautioned shops owners to avoid sabotaging the project by displaying their wares beyond specified points.

He disclosed that the first phase of the iron barriers covering about 1.96km on both sides from Tinubu Square to Idumota has been completed and plans are ongoing to erect similar barriers in other major streets and markets within the Lagos Island Business District as part of its renewed efforts to curb the menace of street trading and its attendant effects on vehicular and human traffic within the area.