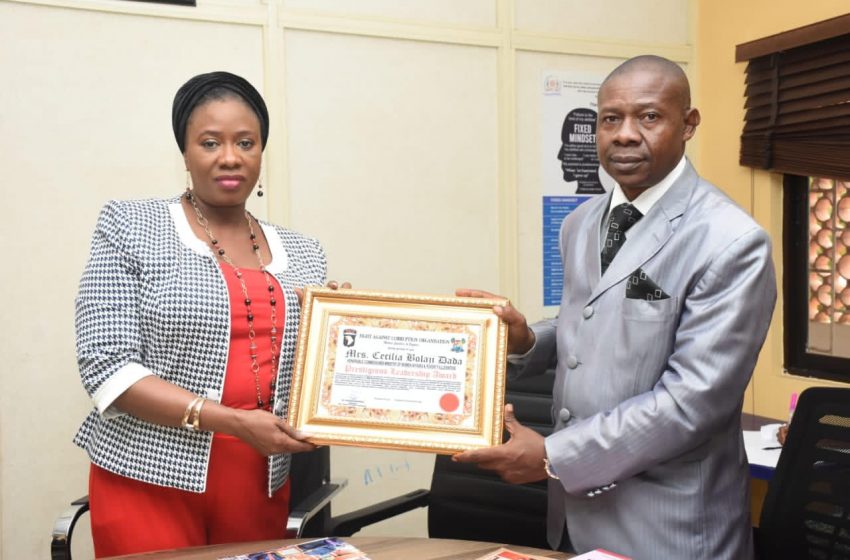 The Commissioner for Women Affairs and Poverty Alleviation, Mrs. Cecilia Bolaji Dada, has been awarded an honorary Award of Credence by the Fight Against Corruption Organisation (FACO), a Non-Governmental Organisation focused on strategies and advocacies to curb reprehensible activities that constitute a national menace.

Receiving the Award recently from a delegation of FACO who paid a courtesy visit to her Office in Alausa, Ikeja, Mrs. Dada stated that one of the mandates of the Ministry is to empower women who will adequately support their homes and instil enviable values in their offsprings as future leaders.

She said: “As a Ministry, we are aware that corruption has eaten deep into almost every sector in the country. As such, we understand the vital roles that women play in societal development. Therefore, while training our women, we harp on the importance of instilling good characters in their children from a tender age, so that they do not depart from those teachings”.

Reiterating the need to build formidable youths and drastically curb corruption, Mrs. Dada maintained that Lagos would continue to sustain and inculcate lessons, as well as practical skills, in curbing corruption by using the Ministry’s existing platforms.

The Commissioner expressed gratitude to the organisation for the recognition and noble gesture, dedicating the award to the entire management and staff who have been working tirelessly to achieve the mandate of the Ministry by empowering residents, especially vulnerable women and youths.

Leading the five-man delegation, the Chairman of FACO, Mr. Francis Sogbekan, stated that the organisation is interested in collaborating with WAPA on uprooting corruption among the citizens of the country, using various engaging and enlightening platforms.

He urged mothers to monitor their children from being exposed to corruption in society, noting that such development could positively shape their views and actions.

“At FACO, we are dedicated to transforming Lagos State and Nigeria as a whole from a perceived corrupt country to an ethical and upright country, where citizens do what is moral and expected of them with minimal or no supervision ”, Sogbekun asserted.