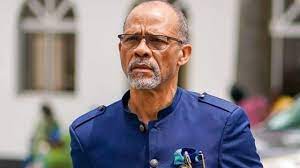 In fulfilment of Governor Babajide Sanwo-Olu administration’s medical infrastructure blueprint agenda for Lagos, the State Government has revealed plans to convert the environment of the Lagos State University Teaching Hospital (LASUTH) into a fit for purpose medical infrastructure which will help the tertiary institution seamlessly carry out its core functions of training, academic research and providing highest level of medical intervention for complicated medical cases.

Commissioner for Health, Prof. Akin Abayomi who disclosed this today after an inspection tour of facilities at LASUTH and the Lagos State College of Medicine (LASUCOM) noted that the overall goal is to position the tertiary academic institution as one of the best tertiary academic centers in Nigeria and the world.

He explained that discussion are ongoing between the Ministry and the management of LASUTH on how to transform the entire LASUTH/LASUCOM empire into a modern day tertiary academic facility adding that the consideration is to carry out the overhaul in blitz or segments with a master site plan in multiple phases.

Said he: “The problems here are historical, infrastructural and operational. Historically, this is a colonial facility that was transformed from a General Hospital into a Teaching hospital. It was initially not designed for that purpose; it was acquired and the organization here are doing the best they can to run it as a tertiary academic centre.

“LASUTH is positioned to be the apex of medical expertise but the tertiary academic facility is handicapped by the hierarchy of medical facilities underneath it; that is the secondary and primary health facilities. So LASUTH ends up seeing what it shouldn’t be seeing or such badly complicated cases from lack of good management from primary and secondary levels.

“The master plan for the future is to convert the infrastructure environment of LASUTH into a fit for purpose facility for it tertiary academic functions which is to train medical personnel, conduct research on relevant issues in the environment and receive the most complicated of medical cases”

While noting that the highest level of medical expertise should reside at LASUTH, Abayomi stated that LASUTH is the penultimate establishment for training of core medical personnel adding that the State is working on improving LASUTH’s ability to train a multitude of cadres of health professionals starting with overhauling the facility infrastructure.

He added that the State Government is working assiduously to convert the LASUTH environment into an environment that is conducive for the trainees and qualified medical personnel to remain stressing that the issue of a conducive environment is fundamental and germane to preventing brain drain.

The Commissioner noted that the government is also fixing secondary and primary health systems so that citizens do not bypass primary and secondary levels to overwhelm LASUTH with cases that can be handled at bottom levels of health care.

“Profit is not the core mission of LASUTH. The mission is to treat you according to international benchmark processes. LASUTH is known for that and must continue to be known for that and raise a standard and move up the pegs along the rankings of teaching hospitals. LASUTH will continue to improve its rankings amongst the tertiary academic hospitals in the world”, Abayomi said.