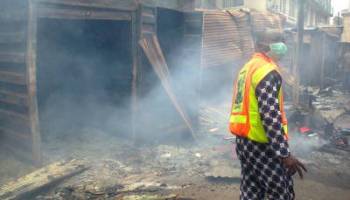 The Lagos State Fire and Rescue Service has saved 23 warehouses in Iddo area of Lagos State from being razed by an inferno that destroyed eight warehouses and shanty structures.

The Acting Controller, Lagos State Fire and Rescue Service, Mrs. Margaret Adeseye, made this known while speaking on the incident at the location, adding that the Agency responded to a fire alert from Iddo/Otto, in Lagos Mainland Local Government of the State on Sunday at about 1805 hours.

She disclosed that the officers on duty immediately deployed two Fire Engines and crew to combat the inferno, explaining further that on arrival at the scene, it was discovered that the fire had engulfed a warehouse while spreading to eight others in the row of about 31 warehouses.

The Fire Boss stated that the Firefighters sent to the location were able to curtail the spread and  prevented the destruction of 23 warehouses in an operation that lasted throughout the night.

Informing journalists that the warehousing arrangement with wrong stacking and piling of goods hampered operations while helping to spread the fire, Adeseye declared also that items stored in the warehouses, which included candle wax, lighters, batteries and polish among others worsened the fire incident.

“Preliminary investigation reveals that the fire emanated from shanty structures used for residential purposes behind the warehouse as a result of carelessness, thereby engulfing one of the warehouses before spreading to others”, she stated.

She confirmed that no life was lost in the incident which was put under control by the Lagos State Fire and Rescue Service, in collaboration with the Federal Fire Services, Julius Berger Fire Department, LASEMA and the Nigeria Police, adding that the team will complete the mop-up of the area soon.