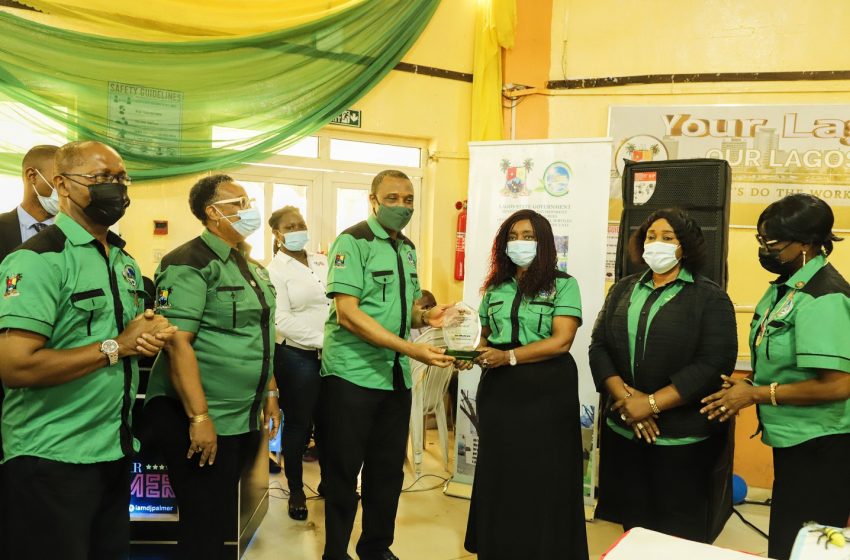 All environment-related clubs in Lagos State schools, on Wednesday, came under one umbrella known as Environmental Bees Club, with the First Lady, Dr. (Mrs.) Ibijoke Sanwo-Olu, charging the students to become agents of positive change of the environment.

The First Lady, speaking at the launch of the Environmental Bees Club (EBC) held today at the Adeyemi-Bero Auditorium, Alausa, pointed out that there is a need for sustainable environmental education with the involvement of the younger generation of students.

She explained that the practice only serve as a panacea to the yearnings for a greener environment through attitudinal and self-monitoring approach, stressing that nowadays the environment has more issues with humanity’s footprints almost everywhere, such as changes in the natural world having greater consequences regarding climate change, famine, pollution of all forms and indiscriminate dumping of refuse.

In her words: “With the formal launch, students, who are the hope of the future, are adequately updated and equipped with the skills and information to transform the environment into a greener one for the benefit of all”.

She described the launch, which also featured the unveiling of an EBC training manual, as a brilliant collaborative initiative aimed at tackling environmental challenges that promote a sustainable environment.

Speaking earlier, the Chief host and Commissioner for the Environment and Water Resources, Mr. Tunji Bello said that making the young ones environment champions heralds a new approach to environmental management.

The Commissioner said the launching of the club is a milestone made possible by the support of Mr. Governor and his wife, adding that it marked a new dimension for the complete eradication of all environmental nuisances that stare all in the face, while the set objective is achievable through the practical demonstration of actions required by involving children in the ecosystem value sustainability.

He recalled that the original concept started as Schools Environmental Advocacy Programme and took off in Y2005 during the tenure of Governor Bola Tinubu with the New Era Foundation as its main facilitator, explaining that the objective was to inculcate sound environmental practices in the minds of students so that they can serve as vehicles of change.

The Commissioner stressed that the club in years past ensured students were exposed to practical knowledge in matters relating to global environmental issues and best environmental practices employed by international communities towards reducing the effects of environmental degradations, through exchange visits to Germany.

Bello recalled that the club was initially known as Green Hands Club and later metamorphosed into Climate Change Club (CCC), working with various environmental clubs, explaining that the Government deemed it fit to harmonise all the clubs, hence the change of the name to Environmental Bees Club (EBC).

“It is in the light of this that the Ministry is desirous of harmonising all the environment based clubs in schools and henceforth rebrand them; we are also launching a non-examinable standardised training manual for use in schools by already trained club handlers with adequate knowledge on trending environmental issues”, Bello stated.

He said Environmental Education is geared towards developing a populace that is aware and concerned about the environment and its associated problems, adding that those equipped through training would seek remedies to environmental problems and prevent the new ones.

In her remarks the Permanent Secretary, Office of Environmental Services, Mrs. Belinda Odeneye said that the care for the Environment can be achieved through knowledge acquisition, attitudinal change and development of individuals capable of taking actions on environmental issues towards achieving a sustainable environment.

She said a lot could be manufactured from non-biodegradable materials such as Plastics, Nylon, Used tires and this can be achieved through recycling as well as reuse.

The Environmental Bees Club and Training Manual for Handlers of the club were later officially unveiled by the First Lady with the assistance of the Wife of the Deputy Governor, Mrs. Oluremi Hamzat, the Commissioner for the Environment and Water Resources and other dignitaries.

Awards were also presented to students and pupils who distinguished themselves in the essay competition and to various Environmental Ambassadors. Amongst them were the former First Lady of Lagos State, Mrs. Oluremi Tinubu, First Lady, Mrs. Ibijoke Sanwo-Olu and Dr. (Mrs) Adeyemi Kuburat, the best Desk Officer in Lagos State, amongst others.