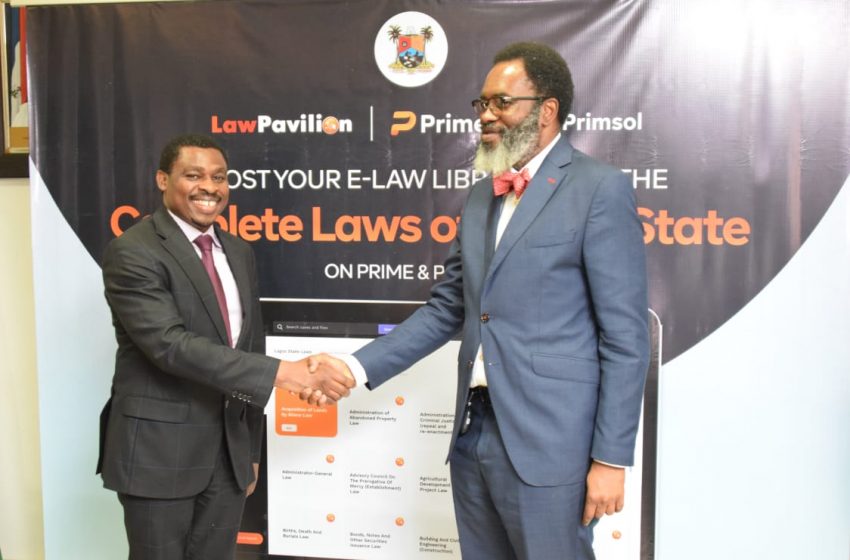 In a bid to ensure quick dispensation of justice as well as easy access to justice in Lagos, the State Ministry of Justice, in partnership with LawPavilion Business Solutions – a technology solutions provider engaged in the business of publishing judicial authorities, cases and laws, has unveiled the Lagos State e-Laws platform.

In his welcome address at the event held on Wednesday at the Ministry, the Attorney-General and Commissioner for Justice, Mr. Moyosore Onigbanjo said since the inception of the present administration, the justice sector in Lagos State has experienced the implementation of programmes and policies aimed at giving residents greater access to justice through dynamic law reforms and adherence to the rule of law.

Onigbanjo stated that the importance of creating awareness of the laws passed by the Lagos State House of Assembly cannot be overemphasised, hence the collaboration between the Ministry of Justice and LawPavilion, to publish the laws of the state in electronic format for easy access by everyone.

He said: “The State, in its bid for an effective and efficient administration of justice, through the Law Reform Commission – an agency of Government charged with the responsibility of publishing the Laws of Lagos State and other state legislations in electronic and print copies entered into an agreement with LawPavilion Business Solutions”.

The agreement, according to him, is for annotation of the laws of Lagos State and conversion of the laws on agreed texts and format for publication on the LawPavilion electronic platform.

The Attorney-General also noted that one of the advantages of the initiative is that the e-publishing of the laws will provide ease of doing business, as investors and other interested persons will now have access to all the Laws of Lagos State at a glance while reducing the difficulties that are often associated with the physical purchase of the Law booklet.

He said: “This means that the annotated laws of Lagos State are available to the public and particularly to lawyers all over the world, I, therefore, welcome you to a world of easy access to the robust Laws of Lagos State”.

The Solicitor-General and Permanent Secretary, Ministry of Justice, Mrs. Titilayo Shitta-Bey, in her address, thanked Governor Babajide Sanwo-Olu for his support towards the quick dispensation of justice.

She noted the project couldn’t have been achieved without the support of Mr. Governor, just as she thank the Law Reform Commission for a thorough job, noting that the e-Law of Lagos State will in no small measure bring the administration of justice in tandem with international best practices, which leverage technology as a major driver of legal initiatives.

The Managing Director, LawPavillion, Mr. Ope Olugasa stated that the epoch-making event is the first of its kind by any State in Nigeria, adding that the initiative is in line with the current reality of the new normal.

Olugasa further noted that the e-Law will make it easy for judges and legal practitioners to have access to the complete and updated laws of Lagos State, saying that those who want access to the laws have the option of either, an outright purchase of the entire laws for a token or an annual subscription through the LawPavillion platform.