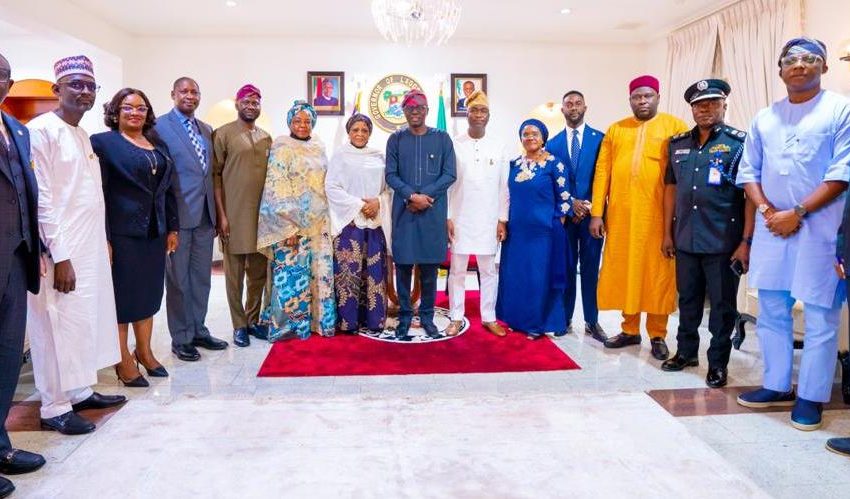 National Youth Service Corps (NYSC) has ranked Lagos as the most friendly State to the scheme.

Chairman of the NYSC National Governing Board, Ambassador Fatima Balla Abubakar, said Lagos remained the only State across the federation supporting the scheme with quarterly subvention to keep activities going.

Abubakar disclosed this on Monday when she led members of the Board on a courtesy visit to Governor Babajide Sanwo-Olu at the State House, Marina.

The scheme’s Board chairman commended the State Government for setting up state-of-the-art security apparatus at the Iyana Ipaja NYSC Orientation Camp and for prompt payment of State allowances to Corps members.

She said: “We are aware of what the State Government has been doing for NYSC in Lagos. We have found out that Lagos is one of the most friendly States to the scheme. Our State coordinator has full access to all Government stakeholders, which is the reason the scheme is being run smoothly in Lagos.

“Lagos Government, without being prompted, pays quarterly subventions to the scheme in the State. This is a major progress for NYSC, because we know what the scheme is going through in other States. This is something unique and we convey our appreciation to the Governor for this opportunity.”

The Governor said the State’s support to the scheme was to enable Corps members to reflect high sense of commitment and responsibility in discharging assignments handed to them in the course of the service year, including their ad hoc engagements in electoral process.

Sanwo-Olu said Lagos approved a monthly stipend for Corps members that is about three times higher than what other States pay, because of the need to make them comfortable and enable them contribute their efforts towards development.

He said: “As a responsible Government, we understand how critical the contributions of Corps members are to accelerate development in communities across the State. Beyond being graduates serving their country, they are also the leaders we will be passing the baton of leadership to in not too distant future. As such, we see Corps members as part of those we need to help develop and take their comfort as our responsibilities.

“While we cannot carry the burden of the whole country, but whoever gets posted to undertake the national youth service in Lagos will have the best of their time. We are happy that our modest contributions have been acknowledged by the NYSC and appreciated. We will continue to support the scheme to ensure Corps members reflect high sense of commitment and responsibility in assignments they take up.”

Sanwo-Olu charged Corps members on transparency and integrity in any national assignments entrusted to them, saying the manner with they engage the tasks would be counted as their own service to the nation. He said many of them would be engaged in the forthcoming general elections as ad hoc staff. He advised them to see the task as one to be discharged with a high sense of responsibility and impartiality.

The Governor told the Board members that the effort for the relocation of the scheme’s activities to the proposed permanent site in Agbowa was on course, disclosing the the State Government had commenced the construction of NYSC permanent orientation facility.

Sanwo-Olu acceded to the Board’s request of additional ambulance for Lagos NYSC Orientation Camp in Iyana Ipaja for quick response to medical emergencies.

“We will continue to do what we can to ensure the scheme remains relevant to our national development,” the Governor said.

Abubakar urged the State Government to speed up the construction work on the permanent site, while also appealing for high-capacity bus to aid the activities of the scheme.