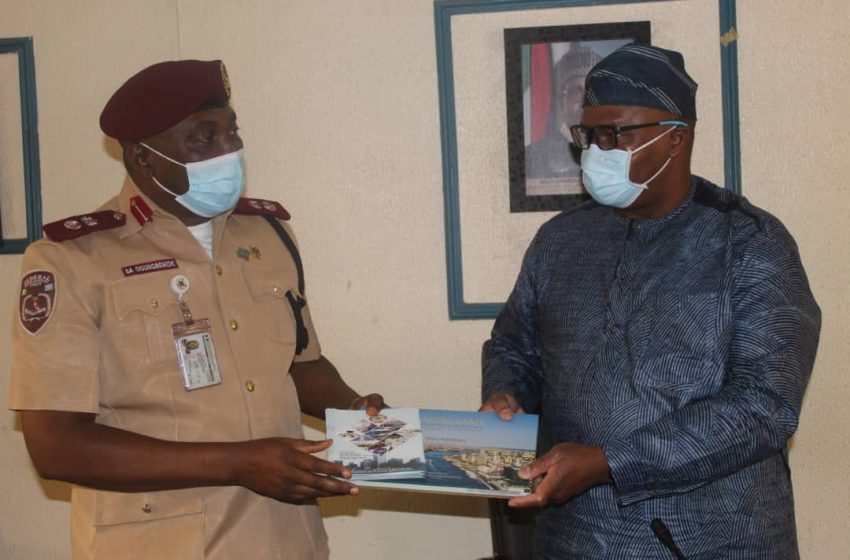 The Lagos State Governor, Mr. Babajide Olusola Sanwo-Olu, has been commended for his support to the Federal Road Safety Corps (FRSC) and for the collaboration of the State Agencies with the Corps, which has been described as robust.

The Lagos State Sector Commander of FRSC, Mr. Segun Ogungbemide, gave this commendation when he visited the Ministry of Special Duties and Intergovernmental Relations recently.

Ogungbemide confirmed that Lagos remains the most effective and efficient State in the management of emergency situations in the country and acknowledged that the First Responders like the Lagos State Emergency Management Agency (LASEMA) and the Fire Rescue Service had been trained to deliver excellent services even as they had been equipped with state-of-the-art equipment that is second to none in the federation.

“Ï promise that my command will not only collaborate with the State to ensure safety on the high ways, my men will always ensure the safety of emergency service personnel during rescue operations”, he said.

The Sector Commander solicited further assistance from the State, especially in the management of emergency situations at the boundary between Lagos and Ogun States, just as he stressed the need to collaborate with neighbouring Ogun State in the areas of emergency rescue management and support to handle building collapse, fallen tankers and infernos, gas explosions and many other disasters.

He thanked the State Government and used the opportunity to remind the Governor of his promise to support the command with operational vehicles and other needs.

Welcoming the Sector Commander and his team to the Ministry, the Permanent Secretary, Dr. Omobolaji Gaji, stated that it is part of the T.H.E.M.E.S Agenda to ensure that the occurrence of disasters is drastically reduced and when it occurred, be managed efficiently and effectively.

His words: “Part of making Lagos a 21st-century smart city includes the efforts at ensuring that the effect of disasters is efficiently managed, as securing the lives and property of Lagosians remains crucial and of uppermost importance to the current administration”.

According to the Permanent Secretary, it is the policy of the State to provide free treatment for victims within the first 48hours of any emergency, noting that the Trauma Centre along the old Toll Gate on the Lagos-Ibadan Expressway, across CMD Road, is situated there to render such services whenever they are required.

He, however, noted that vehicular accidents could be avoided on the Expressways if drivers adhere to the Road Traffic Law and respect the rights of other road users.

Gaji further advised that public education tools like radio jingles and other advocacy programmes should be used to improve driving etiquette on the roads.