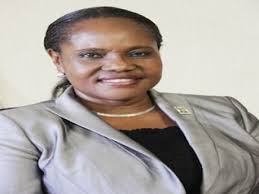 The Secretary to the Lagos State Government (SSG), Mrs. Folashade Sherifat Jaji, has charged women to rise above archaic cultural practices and traditions in order to improve their socio-economic value as well as to make a difference in society and the world at large.

She gave the charge today at the maiden edition of ‘Women-in-Uniform’, put together by the Federal Road Safety Corps (FRSC), Lagos Sector Command, to mark the International Women’s Day celebration.

Jaji, who was the Special Guest at the ceremony held at Adeyemi-Bero Hall, Alausa, applauded the Lagos Sector Command of the FRSC for the initiative to celebrate the contributions of Women in Uniform in Lagos State and indeed Nigeria, urging women to remain focussed in order to excel in their chosen profession.

She said, “Women have played a significant role in shaping the society as leaders of nations, heads of corporations and institutions in the military, para-military, bureaucracy, sports and arts. Our contribution to the socio-economic and political success of a nation cannot be overlooked”.

Represented at the event by the Director, Political Affairs and Special Services in the Cabinet Office, Mrs. Olabisi Shonibare, the SSG said in order to keep breaking the glass ceilings, women must regularly update their knowledge, be focused on their goals, enlarge their network and help one another at all times.

She stated that the theme of the conference, “Achieving An Equal Future In A COVID-19 World”, will not only address the developmental issues confronting women in Nigeria, Africa and other nations of the world but would also pave way for the paradigm shift in the belief that certain positions are only for women and the girl-child.

She noted that Coronavirus affected men as much as the womenfolk since the first index case was recorded in Lagos State in February 2020, and it is on record that women including those in uniform exhibited remarkable resilience by working as hard as their male counterparts before, during and after the pandemic.

According to her, today’s women played significant roles in the nation’s match towards a balanced polity and they must be appreciated and celebrated for complementing men.

She listed and commended most of the women who charted a path that was hitherto reserved for the men, saying that they had given hope to the women and girl-child to dare to be different.

“Commendations must be given to women such as Mrs. Funmilayo Ransome-Kuti, Dr. Ameyo Adadevoh, Rear Admiral Itunu Hotonu, the SSG’s classmate in Queens College, Yaba, who is the first female Admiral in Africa, and Chinyere Kalu, first Nigerian female commercial pilot to fly an aircraft in Nigeria as well as late Tolulope Arotile, the first-ever female combat helicopter pilot in the Airforce, who contributed immensely to combat insecurity in the Northern State despite her short life, for charting a part in areas reserved for men”, Jaji asserted.

She also celebrated more women in the Lagos State Fire Service, Transport Management Authority and others, urging them to stay motivated by the highly competent and confident women like the recently appointed first woman and first African to head the World Trade Organisation, Dr. (Mrs.) Ngozi Okonjo-Iweala.

The FRSC Lagos Sector Command, Corps Commander, Mr. Olusegun Ogungbemide in his welcome address said the programme was organised in collaboration with #SisterArt Global Visual Arts to celebrate the socio-economic, cultural and political achievements of women, especially the women in uniform, who sacrificed their comfort and lives in the line of duty to ensure the security and safety of the citizens.

Quoting Michelle Bachelet, he said “progress of women is the progress of all of us. Giving priority to women is not an option, it is a necessity. Giving more opportunities to women, besides being a matter of rights, is also a manifestation of economic sense”.