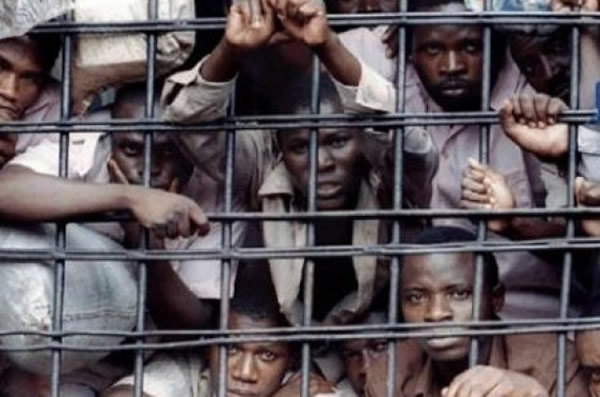 Eight of the inmates were released from Ikoyi Custodial Centre, 11 from Maximun and 14 from Medium Custodial centre

The inmates were pardoned at an open court session presided over by the Chief Judge at the premises of Justice Samuel Ilori Court House, Ogba.

Justice Alogba noted that the exercise was in line with the efforts by the Federal Government to decongest the prisons as stipulated in Section 6 of the1999 Constitution of the Federal Republic of Nigeria, as amended, Chapter 40 of the Administration of Criminal Justice Act 2005.

He said it was also pursuant to powers conferred on him to grant the inmates pardon pursuant to Section 1(1) of the Criminal Justice Release from Custody Special Provision Act.

Justice Alogba lamented that the prevalence of crimes in the society have been so horrendous for anybody to consider releasing anybody who have not been processed under the law.

He explained that thẹ criteria used to determine those released were not based on sentiments but “were meticulously followed and scrutinised by the Justice Adenike Coker-led decongestion committee.”

“Those released were found fit and suitable to be released back into the society,” Justice Alogba said.

Releasing the inmates, Justice Alogba urged them to go and sin no more and be of good behaviour, adding that harder punishment would be meted out on any of the inmates caught committing a crime again.

He admonished them to retraced their steps and ensure they are not involve in crimes again.

The CJ, however, praised the efforts of the Non-Governmental Organizations, NGOs, which he noted have been doing their best to reform the inmates to make it easier for them to be integrated back into society.

Earlier, in a welcome address, the State Controller of NCS, Francis Adebisi remarked that the population in the custodial centres have become a great challenge due to congestion.

He stated further that there are 352 special category of inmates, while 150 are serving life jail term.

He said the decision to release the deserving inmates would go a long way to improve situation at the custodial centres across the state.