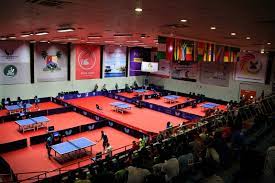 National Stadium, Surulere, also known as ‘Sportscity,’ will come alive on December 18, when eight teams, comprising four each in the men and four women’s categories, compete for honours at the finals of the Lagos Table Tennis League.

The final leg of the competition, which began last month with 15 teams, holds at the Indoor Hall of the stadium.

The final of the event organised by the Lagos State Table Tennis Association (LSTTA) in collaboration with friends of table tennis, according to chairman of LSTTA, Tunji Lawal, will have all the elements of finals as top teams contend for the jackpot prize money.

He disclosed that 28 teams featured in the three-week qualifier leading to the top four teams in men and women class advancing to the finals.

“We are excited with what we saw during the qualifying matches because some young players came through and showed what they can do against their senior counterparts.