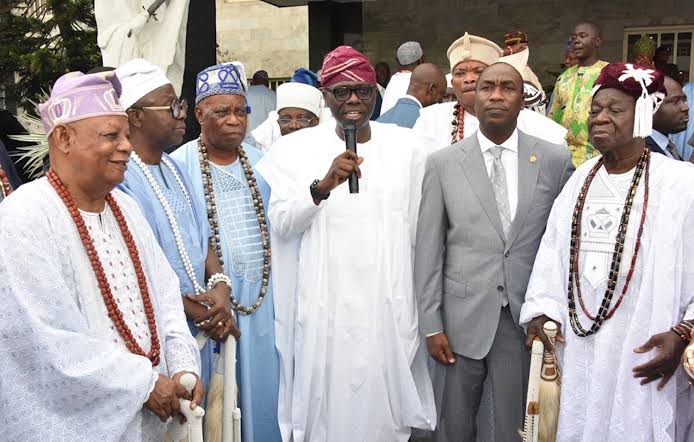 The Commissioner for Local Government and Community Affairs, Dr Wale Ahmed, gave the charge at  a Retreat, organised for traditional rulers in Lagos state.

The theme of the retreat is: ”The Role of Traditional Rulers in Conflict Resolution and in Fostering Communal Peace and Economic Development in Lagos State”.

Ahmed said that traditional rulers in the state,  had continued to be development catalysts and respected agents of mobilisation for policy implementation, monitoring and review of policy options.

He said  the role of traditional rulers was beyond being custodians of tradition and culture and could never be overlooked in the scheme of things in the state.

”Conflict resolution is a long-standing traditional engagement of our royal fathers. This has been passed from generations and effectively replicated in our contemporary society.

”This role has contributed  to the peaceful coexistence among people of different backgrounds and beliefs in our state, resulting in remarkable economic progress.

”We thank you for this but still request that you do more, especially at this period of challenges and unprovoked aggression among people,” he said.

The commissioner said that traditional rulers had a special responsibility to uphold,  not just traditional values, culture and customs but to also ensure that information dissemination flowed to all nooks and crannies.

He said the traditional rulers should ensure that residents in each community,  understood government policies and programmes in the simplest form, using preferably the indigenous languages.

Ahmed said  it was expected that as royal fathers and opinion leaders, they would properly and adequately educate their subjects, including youths, on how they could play their parts, to help the government deliver more dividends of democracy.

”And as the closest to the grassroots, the constant interaction with them puts you at vantage position, to get the message across to them and to get their support and cooperation for meaningful development.

”This is not optional, but our collective responsibility to strengthen our cooperation for communal peace and security.

‘Retreat such as this, is used to consolidate the interwoven synergy between the state and traditional rulers, in greasing the wheel of progress ,” he said.

The commissioner said the retreat would offer the opportunity for purposeful engagement on these issues and how they could leverage existing peace and stability in the state, to connect higher economic prosperity.

He urged them to be open-minded and profound in their submissions and to map out ways for improved administration, especially at the grassroots; one that would stir toward the ”Greater Lagos Dream”.

Commending them for their efforts in assisting government in their domains, Ahmed urged the traditional rulers to continue to cooperate with the government and to support its effort at moving the state to the next level.

Speaking on the overview of the Obas and Chiefs of Lagos State Law 2015, Director, Legislative Drafting of Ministry of Justice, Mrs Aderinsola Olanrewaju,  said selection, appointment and recognition of recognised and unrecognised chiefs in Lagos state were guided by law.

Olanrewaju said the idea was to familiarise the Obas with what the law said, particularly about how declarations were made, the power to suspend and the power of the governor under the law.

She said it was to acquaint the Obas,  on what they should do in case of impersonation, offences under the law, how to amend declarations, so that they would be able to relate to all these in respect of the law.

In his presentation on ”Conflict Management and Conflict Resolution Technique”, former Dean of the faculty of Law, University of Lagos, Prof.  Akin Ibidapo-Obe,  said  the role of the Obas and chiefs were mainly mediation and arbitration.

Ibidapo-Obe, a professor of law, said that the primary function of the traditional rulers was to resolve conflicts by mediation and there should be an institute or council of traditional mediators.

He said the council would not only serve the immediate community of the Oba, but could as well, offer their services elsewhere.

Ibidapo-Obe also advocated the need to recognise the important roles that traditional rulers played in mediation and arbitration and provision of a platform that would enhance their skills and give them  basis to reach out even beyond their domains.

Speaking on behalf of the Council of Obas and Chiefs, Oba of Lagos, HRM,  Oba Rilwan Akiolu,  commended the state government for prioritising the intellectual empowerment of traditional rulers in Lagos state, which was evident in the retreat.

Akiolu implored traditional rulers in the state to continue to commit themselves to and ensure they played their roles in ensuring that communal peace in their domains, engendered economic development in the state.