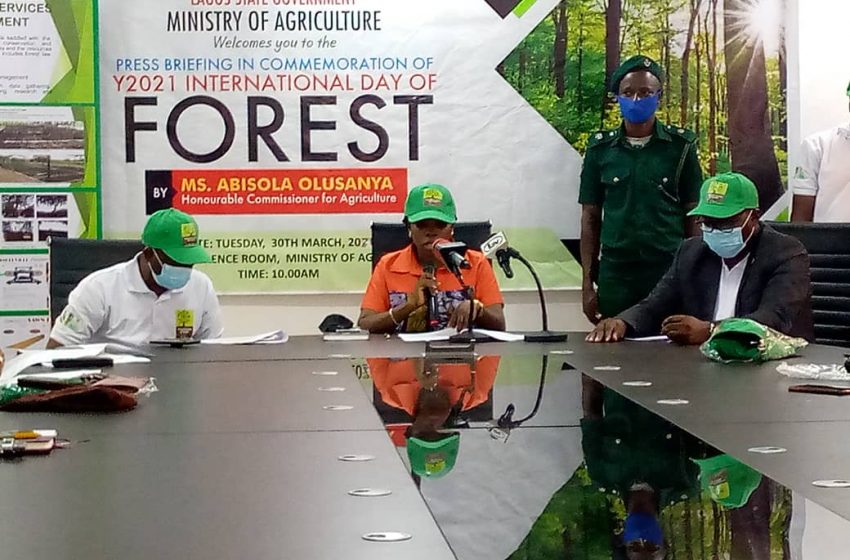 The Lagos State Government has disclosed its readiness to begin an audit of forest estates to mitigate the effects of climate change as well as secure them against intruders, who may be using the forests as cover to perpetrate nefarious and criminal activities.

The State Commissioner for Agriculture, Ms. Abisola Olusanya, who disclosed this in Lagos at a press conference held in commemoration of the Y2021 International Day of Forests, explained that the audit would also enable the State Government to ascertain what was left of its forest and biological biodiversity.

Olusanya noted that climate change as a global threat was worsening water stress, food vulnerability, desertification, increased global temperature and putting thousands of communities at risk, hence it has to be factored into forest-food-water equation.

“Climate change is a global threat and has to be factored into the forest-food-water equation. As a means of mitigating climate change, the State Government intends to carry out an audit of the forest estates in Lagos to enable us ascertain what is left of our forest and biological biodiversity with a view to properly securing them against intruders, who may be using the forests as cover to perpetrate nefarious and criminal activities”, the Commissioner said.

Olusanya stated that there exists a close link between forests, water management, agriculture and food security, which is a mandate of the State Government, hence enough reason for the State to ensure forest preservation and arrest of deforestation and forest degradation.

While noting that deforestation remained a matter of deep global concern leading to global climate change and loss of biodiversity, she stated that forest restoration and avoiding biodiversity loss requires a significant increase in the level of funding and innovative financing from private funds and traditional investors.

The Commissioner averred that the theme of this year’s celebration “Forest Restoration: A Path to Recovery and Well-being”, is apt, reiterating the strong commitment of the State Government to the promotion of sustainable food production in a healthy environment through efficient service delivery.

According to her, “This objective is in line with the Food and Agriculture Organisation’s (FAO) mandate of attaining a world without hunger in line with UNICEF’s Sustainable Development Goal 2 of Zero Hunger”.

Pointing out that the State Government intends to take advantage of the Forest Development Law, which provides for Forestry Trust Fund and Private Participation to fund Forestry projects and programmes through public-private partnership, Olusanya also revealed that Lagos will approach the Federal Government in order to access the ecological fund to tackle some of these damages to the ecosystem.

She disclosed that indigenous tree seedlings are being raised in Badagry and Ikorodu for various tree planting activities in order to prevent the extinction of local flora heritages.

Her words: “The State Government has observed movements of ‘Loxodonta Africana Africana’ (African Forest Elephants) recently within Lagos-Ogun Boundary (Epe waterside). We are, therefore, working with local communities in the area to protect the boundary Forests, prevent the elephants from poachers and halt further encroachment into their habitats”.

Emphasising that it was time to educate and raise the awareness of all and sundry on the importance of protecting the remaining forest cover, especially in the State with a forest cover estimated to be less than 0.2% and fast declining, the Commissioner urged everyone to plant a tree, manage, conserve and restore the forests as well as ensure a healthy planet and sustainable livelihoods for all people.