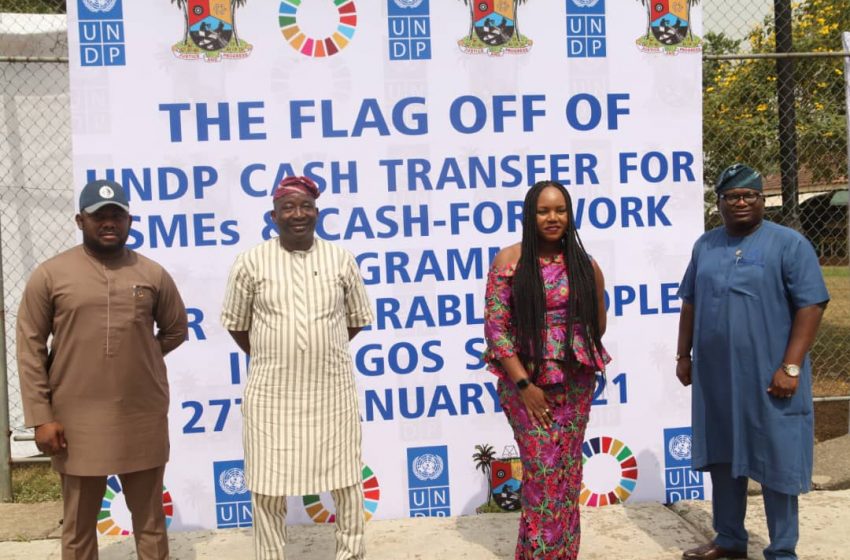 The Lagos State Government, in partnership with the United Nations Development Programme (UNDP), has kicked-off the cash for work programme for vulnerable people in the State with the aim of cushioning the effect of the COVID-19 pandemic.

Speaking at the flag-off of the intervention programme held at the Ndubiusi Kanu Park, Alausa, Ikeja, the Special Adviser to the Governor on Sustainable Development Goals and Investment, Mrs. Solape Hammond described the project as part of government’s response to ameliorate the impact of the COVID-19 pandemic on the vulnerable individuals and small business owners.

According to her, the project is a collaborative effort between the State government and UNDP with the support of the Japan Government that will provide grants to 945 Small and Medium Scale Enterprises (SMEs), to resuscitate their businesses which were affected by the pandemic and aftermath of the #EndSARS protest.

“As the economic fallout threatens households across the State due to COVID-19, cash transfers to vulnerable families reduce risks to socio-economic challenges. This emergency cash transfer programme is designed to help families during this period and to ensure that household poverty does not translate to deprivations for children”, she said

Hammond disclosed that the project is simultaneously ongoing across the Five Divisions of the State to complement Government’s efforts in deploying assistance to SMEs, the vulnerable and the poor people in the State.

Highlighting the significance of the initiative, the Special Adviser stated that the cash-based support programme will not only ensure that the essential needs of beneficiaries are met but also empower the most vulnerable to become self-reliant and participate in economic activities that boost local markets.

She said the beneficiaries that would be engaged by the State government to provide volunteering services were selected across the various social ethnic groups and through the State’s social register for vulnerable people.

While appreciating the support of the United Nations Development Programme, Mrs. Hammond maintained that government will continue to partner other International Organisations, Non-Governmental Institutions and MDAs to sustain and expand its reach to more beneficiaries.

Also speaking at the event, the General Manager, Lagos State Waste Management Authority (LAWMA), Mr. Ibrahim Odumboni, commended the government for the initiative, revealing that the State is desirous of creating opportunities for citizens to live a prosperous life and contribute to its development.

“A new lease of sustainable life is being provided through this intervention, the State government is continuously establishing a prosperous environment for people to live a responsible life”, he affirmed.

In his remark, the Senior Special Assistant to the Governor on Sustainable Development Goals, Mr. Lekan Fatodu, emphasised the need for citizens to embrace the government’s initiatives to improve their standards of living.

“It takes a responsive government to conceive and implement this kind of initiative. With this, 2,400 families were giving hope for a better tomorrow, likewise, 950 businesses will be sustained to create more value to the economy”, Fatodu added.

Appreciating the government on behalf of the beneficiaries, Mrs. Funmilayo Abohi, admitted that the effort will potentially reduce the level of poverty among citizens and help vulnerable families to meet their immediate needs.