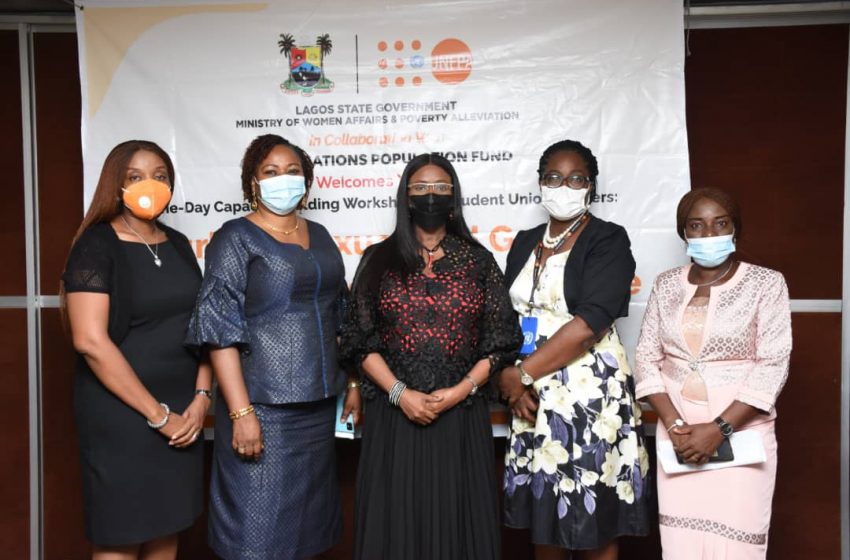 The Lagos State Ministry of Women Affairs and Poverty Alleviation (WAPA), in collaboration with the United Nations Population Fund (UNPF), has organised a workshop for Student Union leaders of nine tertiary institutions in the State on strategies to curb Sexual and Gender-Based Violence (SGBV) in Lagos.

Speaking at the forum held at the Lagos Chamber of Commerce and Industry, Alausa, the Commissioner for Women Affairs and Poverty Alleviation, Mrs. Cecilia Bolaji Dada, urged the participants to live an impactful life geared towards protecting societal values.

She said, “Today, we liaise with our future leaders from nine prestigious citadels of knowledge in our noble State with a view to dialogue and foster mutual understanding, towards an impactful life”.

Dada reiterated that the Governor Babajide Olusola Sanwo-Olu led administration has zero tolerance for all issues involving violence, hence, the government is determined to ensure that every victim or survivor’s voice is heard, cared for and the perpetrators punished accordingly.

“That is why this initiative is focused on enlightening leaders in citadels with the intent to groom the pivotal generation across the various tertiary institutions to curb gender stereotyping, discriminatory practices and unequal gender relations, which often leave survivors with low self-esteem, physical injuries and trauma that has underlying suicidal tendencies”, Dada added.

The Commissioner noted that violators of the Domestic Violence Law in Lagos State face a 25-year jail term on conviction, even as other preventive and intervention programmes are being provided through 10 Sexual and Abuse Clinics across Public Health Facilities in the five divisions of the State.

In her contribution, the Lagos Liasion Officer/Head of Gender Population Fund, Dr. Esther Somefun, stated that the collaborative initiative sprung from the need to offer psycho-social assistance to women and girls who have the highest prevalence rate of SGBV across the State.

She emphasised that there is a need for a transformative goal on gender-based violence as it undermines the dignity and emotional state of survivors, adding that the gruesome experience can also include being victims of sexually transmitted diseases, having long-term trauma or murdered in the process.

Dr. Somefun explained further that WAPA’s collaboration with UNFPA is intended to scale up the art of raising voice on the societal ill within school campuses, such that survivors are being aided at getting justice for every act of wrongdoing towards them.

While stressing that the participants are technically being groomed as advocates of the initiative, she said “As student leaders, you are the voice of survivors and victims on campus. Hence, you must cascade this training to every stakeholder involved as the voice of change towards a better society”.

The highlight of the event was a formal launch of the VRT (Violence Response Team) call-line as an instrument to speak out, which is a novel initiative in the South Western Region of Nigeria.