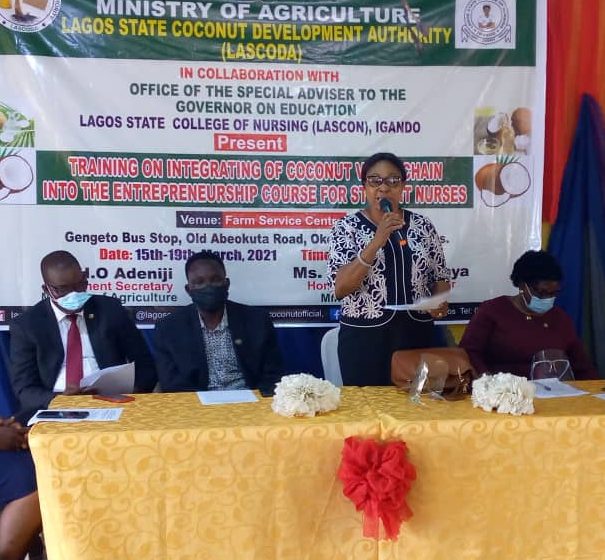 Lagos State Government says it is committed to the promotion of a Youth Empowerment Scheme that would expose youths and students to modern agricultural and value chain skills and methods in the post-COVID-19 era.

The State Commissioner for Agriculture, Ms. Abisola Olusanya made this known at the opening ceremony of the 5-day training in the coconut value chain for student nurses in the State at the Farm Service Center, Oko-Oba, Agege.

Olusanya, represented by the Director, Administration and Human Resource, Mrs. Yemisi Rosiji said that the training was a sub-set of the Schools’ Agricultural Programme (SAP) which was conceived in 1989 in order to support the educational sector in the areas of capacity building and direct intervention.

“This initiative is basically a sub-set of the Schools’ Agricultural Programme (SAP) of the Ministry of Agriculture which was conceived in 1989 in order to support the educational sector in the areas of capacity building and direct intervention.

“I am delighted to note that the SAP is extending her tentacles to tertiary institutions in the State with no other value chain at the center but Coconut which has been variously tagged the ‘Tree of Lagos State’.

“This training is one of the outcomes of many efforts of Lagos State Ministry of Agriculture on Youth Empowerment Scheme designed to, among other things, expose youths and students to modern agricultural and food value chain skills and methods.

“The aim is to empower them with sound practical knowledge if they choose agriculture as a profession or as a source of additional income to whatever choice of the carrier they may pick later in life,” the Commissioner asserted.

She noted that the training would awaken the subconscious of student nurses for self-employment, equip them with the skills needed and expose them to the hidden treasures of the economic and health values of coconut.

According to her, the training has been specially designed in a way that the theoretical contents and modules emphasize developing an entrepreneurship mindset for the participants as well as espousing the health benefits of coconut.

The Commissioner said that the training would be 70% practical which includes hands-on, demonstrations and group discussion with the aim of building the capacity of the participants to produce some edible coconut products independently.

“I consider it necessary to re-affirm that the State is blessed with abundant Coconut resources which informed the establishment of LASCODA, the Agency that is responsible for upholding the State’s comparative advantage of this wonderful crop in the areas of production, utilization and commercialization within the downstream and the upstream facets.

“This training which will be a yearly activity henceforth will be focusing on the processing and utilization of the coconut value chain. I have also been reliably informed that LASCON has gotten the necessary accreditation for integrating this training into the Entrepreneurship Course of Nurses. The implication of this is that all nurses to be trained in Lagos needs to have the skill and knowledge of the processing of edible by-products of Coconut,” Olusanya averred.

The Commissioner emphasized the uniqueness of the nursing profession in the health sector, being the closest to the patients, therefore, making it imperative for them to be well grounded in agricultural value chains that are of great dietary importance.

Earlier, the Provost, Lagos State College of Nursing, Igando, Mrs. Olufunsho Orenuga commended the State Government for creating a platform to train students in the coconut value chain to have an extra source of income.

According to her, the concept of entrepreneurship is a ‘new normal in the educational sector adding that it had always been a part of the educational curriculum but only trivialized.

Orenuga said that the process of revamping the core curriculum which was designed to address societal needs was what gave voice to the need for entrepreneurship.

“In a post COVID-19 world, one of the Nigeria philosophies of education according to the National Policy on Education has, therefore, become more obvious, education for self reliance. This, too, is a new normal as it is being proposed that university education is fast becoming obsolete and so people will have to depend more on their skills to earn a living.

“The importance of entrepreneurship in addressing Sustainable Development Goals 1, 2, 4, 8 and 9 which includes areas of poverty alleviation, zero hunger, wealth creation, job creation, innovation and economic impact has led to the introduction of entrepreneurship as a compulsory course in Nigerian tertiary institutions.

“The advent of the pandemic has also made many things that we have overlooked, more glaring and it has exposed voids and emphasized our non-preparedness especially in the area of entrepreneurship,” Orenuga opined.