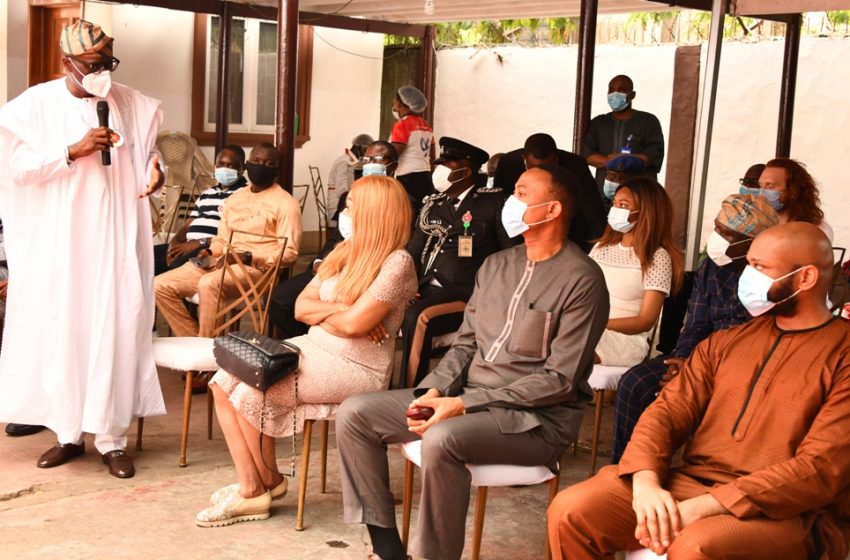 Lagos State Governor, Mr. Babajide Sanwo-Olu, on Friday said the State Government would participate fully in all the programmes leading to the final burial of the former Military Governor of the State, Rear Admiral Ndubuisi Kanu (rtd).

He said the State has set up a four-man committee led by the Commissioner of Information and Strategy, Mr. Gbenga Omotoso, to work with the deceased family and other stakeholders to immortalise and give late Ndubuisi Kanu a befitting passage of exit.

Ndubuisi Kanu, an elder statesman and leader of the National Democratic Coalition (NADECO) died on Wednesday at 77.

Speaking during a condolence visit to the family of Ndubuisi Kanu at the deceased residence in Victoria Island, Lagos, Governor Sanwo-Olu who was accompanied by his deputy, Dr. Obafemi Hamzat; the Secretary to the Lagos State Government (SSG), Mrs. Folasade Jaji; Chief of Staff, Mr. Tayo Ayinde and some members of the State Executive Council, described the late elder statesman as a detribalized Nigerian.

“He was completely detribalised. He was a builder and a brother across the Niger. He was a true real Nigerian that we all need to celebrate. So, that is why we are here humbly for and on behalf of the government and people of Lagos State to reassure you that the State is solidly beside you in this time of grief.

“We and other stakeholders are right beside you because he was not just a man for one part, he was a national figure. We will work with other stakeholders to ensure that we immortalise and we give him a befitting passage of exit out of this world.”

He said: “Rear Admiral Ndubuisi Kanu was one of those that laid the pillar of what we benefit today as the military governor in 1976. And most importantly, his contribution to what we are now benefitting in the country today, democracy; because if people like him were in short supply, this country will not be like this.

“People like him, even though they are not many, they stood firm. They went through all sorts of terrible things but they were good men. So for us in Lagos, we celebrate his life because we know that only God will live forever and that, we as human beings will come and exit the world at some point. But what is important is, what do you do with your life? I think we can say it boldly that our father lived a good life.”

Speaking on behalf of the deceased family, the widow of the late elder statesman, Mrs. Gladys Ndubuisi Kanu, appreciated the Lagos State Government for offering to finance the burial of his husband.

She said: “Since this current government came into power, we have seen a lot of changes between the previous government and this one. This current government has achieved a lot. I admire the young governor. He is full of ideas and very hard working, and also his deputy. Thanks for the visit and for offering to finance the burial of our husband, father, grandfather, cousin and uncle.

“On a few occasions I have been with him (late husband) when he makes a call to his Excellency (Governor Sanwo-Olu) and he answered and they discussed. That is the way he has been participating with young, very hardworking governor of Lagos State.”

Also speaking at the event, the Secretary and spokesman of NADECO, Mr. Ayo Opadokun, hailed the deceased’s positive contribution to Lagos State and Nigeria, especially the role he played as a formidable force after the annulment of the June 12, 1993 presidential election and return of Nigeria to democratic path in May 29, 1999.