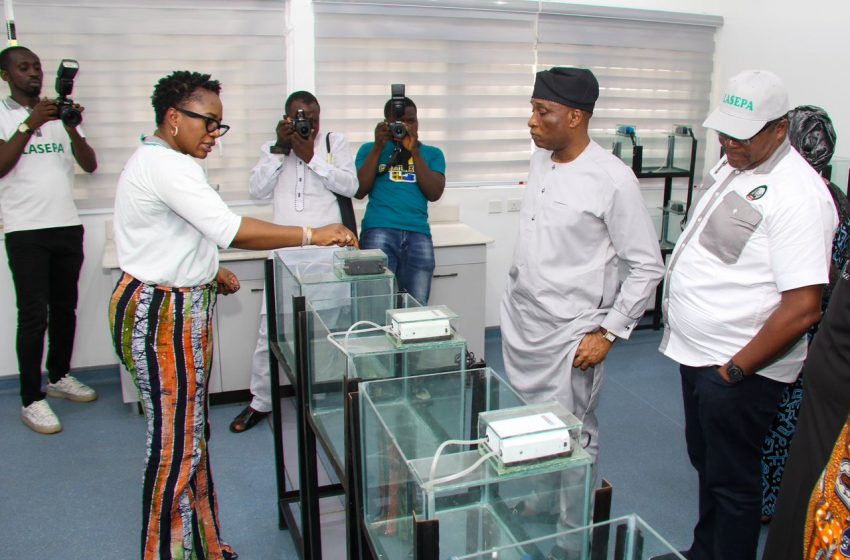 Lagos State Government has recorded another first in its environmental protection drive and in setting the pace for good governance with the establishment of the first ISO-certified government-owned laboratory in Nigeria through the Lagos State Environmental Protection Agency (LASEPA).

Speaking during the official commissioning of the ultra-modern laboratory located within the premises of LASEPA recently, the State Governor, Mr. Babajide Sanwo-olu said that the upgraded and re-equipped laboratory will further improve the quality of life for Lagosians.

Represented by the Commissioner for The Environment and Water Resources at the event, Mr. Tunji Bello, the Governor added that the event demonstrates his commitment to issues relating to the environment and the general well-being of residents of the State.

According to him, the upgrading of the LASEPA Laboratory became necessary as a result of the growing population of the state and the need to enhance the capacity of the Agency to effectively deliver on its core mandate of monitoring the environment for safety and sustainability.

“This accreditation has given Lagos State global recognition and acceptance as results generated from this laboratory are consistent and accurate through industry-standard protocols; and in line with best practices obtainable worldwide”. the Governor stated.

Sanwo-Olu urged the Management and Staff of LASEPA, particularly those that would be charged with the responsibility of operating the Laboratory to do so with utmost professional care and a high sense of responsibility.

His words: “The Management must also, always keep in mind that to whom much is given, much is expected in return. Our administration will continue to invest in projects that are consistent with our goal of ensuring a healthy, safe and sustainable environment”.

“As we strive to bring about a more resilient and environmentally sustainable State, we look forward to a more purpose-driven partnership with local and international bodies, academic institutions, researchers and non-governmental organisations”, Sanwo-Olu stated.

Earlier, the Chairman of the House of Assembly Committee on Environment, Hon. Rotimi Abiru said that the rate of human activities and the huge population of residents as well as the presence of many industries across the State make it compelling for Government to be deliberate about paying attention to the environment.

While noting that the initiative complements  LASEPA’s resolve to ensure that all residents of the State have access to quality air to breathe, Hon. Abiru appreciated the General Manager of the Agency and other environment-friendly stakeholders for championing the protection of the Lagos environment.

Giving an overview of the upgraded Laboratory, the General Manager of LASEPA, Dr. Dolapo Fasawe explained that the Laboratory formerly known as the Laboratory Department, serving the then Ministry of Environment and Physical Planning was upgraded by Governor Sanwo-Olu.

According to her, the initiative of the ISO-certified laboratory, was in line with the present administration’s T.H.E.M.E.S agenda which prioritises Health and the Environment, saying that the project resonates with LASEPA’s mandate of safeguarding the environmental quality of the state’s land, air and water resources.

She described the ISO-certified laboratory as a boost for the Agency’s mandate in the area of monitoring the activities of industrial, commercial and government entities in the state to ensure compliance with the environmental management laws of the state while also achieving sustainable development.

Fasewe revealed that following her deployment to the agency as the General Manager and upon the realisation that the mandate of LASEPA borders around effective laboratory services, she identified the need to embark on the upgrade and standardisation of the agency’s laboratory.

She noted that the agency would not have been able to achieve the upgrading and re-equipping of the laboratory without Governor Sanwo-Olu, who supported the initiative from incubation to completion, alongside the Commissioner for the Environment, some key members of the State Executive Council as well as some principal government officials.

The upgraded Laboratory now has state-of-the-art environmental laboratory equipment and engineering processes which are in line with International Standards Organisations (ISO) standards and best practices.