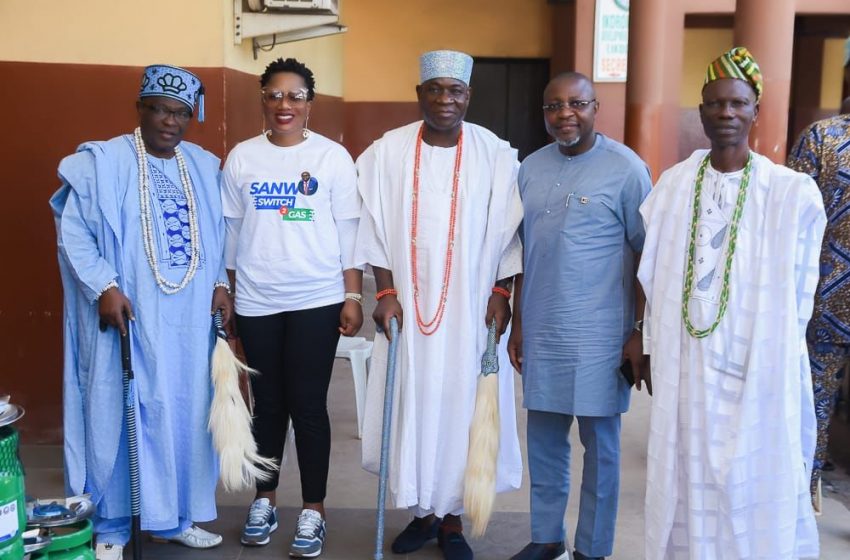 The event which took place at the Ikorodu Town Hall, had in attendance, hundreds of residents who were given pre-filled gas cylinders and other eco-friendly materials in exchange for single-use plastic wastes.

According to the General Manager of LASEPA, Dr. Dolapo Fasawe, the “Sanwo Switch to Gas” initiative also presents an opportunity to further raise awareness on plastic recycling for a better and sustainable environment, revealing that the agency is pushing for a circular economy, especially when it comes to proper disposal of all forms of waste using the “Trash for Cash” method.

She stated that the campaign is to advocate and sensitise the residents on the need to phase out the abuse of the environment from the use of burning of charcoal, firewood usage and also encourage residents to appropriately dispose of various domestic and industrial wastes.

Fasawe said that there is a need to enlighten the residents about the EKO Clean Air, noting that Governor Sanwo-Olu is particularly concerned about the health and environment of Lagosians, thus the need for collective action against unfriendly lifestyles, single-use plastics and burning of fossil fuels so as to protect the environment for generations yet unborn.

In her words: “We have to stop burning fossil fuels and start cooking with gas, the truth is that we have done the research and we have seen that a lot of people do not even understand the benefits of using gas in terms of cost, health and efficiency.

“This advocacy is meant to promote friendly attitudinal change, our plan is to go around the 20 Local Government Areas and 37 Local Council Development Areas of the State. We would continuously educate the people, communicate with them and pass information through entertainment. We want to encourage recycling and urge you to bring plastic bottles, the more plastic bottles you bring, the more cash or gas cookers you will receive”.

“We considered it necessary at LASEPA to bring this message of Eko Clean Air to the residents of lkorodu. We want the people of Lagos to know that there is nothing called waste because what is considered waste is someone else’s treasured raw materials”, she added.

The General Manager disclosed that the most important key performance indicator of the State Environmental Protection Agency is to keep the environment and air clean, in line with Governor Babajide Sanwo-Olu’s T.H.E.M.E.S. Agenda on Health and Environment.

She enjoined the residents to keep the environment clean, avoid air pollution, protect their children from environmental hazards, and embrace all government initiatives designed to tackle pollution.

Fasawe expressed gratitude to the Lagos State Lotteries and Gaming Authority for sponsoring the programme, adding that their support would assist the agency in reaching out to the teeming population of the State.

The Chief Executive Office of the Lagos State Lotteries and Gaming Authority, Mr Bashir Are, explained that the areas for the sensitisation programme were often chosen based on the rate of air pollution detected by LASEPA.

According to him, the Eko Clean Air project was an intervention by the government to address air pollution, promote a circular economy and also empower the vulnerable members of the society for sustainable development.

Are, who ruled out possible political motives behind the initiative, revealed that his agency is empowered under the law to support and embark on corporate social responsibility on people-oriented causes such as education, health, environment and social infrastructure as a way of giving back to society.

“Our criteria for selecting the areas for this advocacy are based on the measurements of air pollution by the LASEPA equipment, so the areas where we detect much pollution are where we select first. We started from rural communities and very soon we will be in Ojo, Ajegunle and Ijora”, he said.

The event’s highlight was the issuance of a health insurance certificate with a year of coverage (Ilera Eko) to eligible beneficiaries in exchange for bags of pet bottles.

All the participants commended the State Government for extending the laudable initiative to Ikorodu. They echoed that the community members are better enlightened about air pollution and would take ownership of the project to keep a sustainable environment.