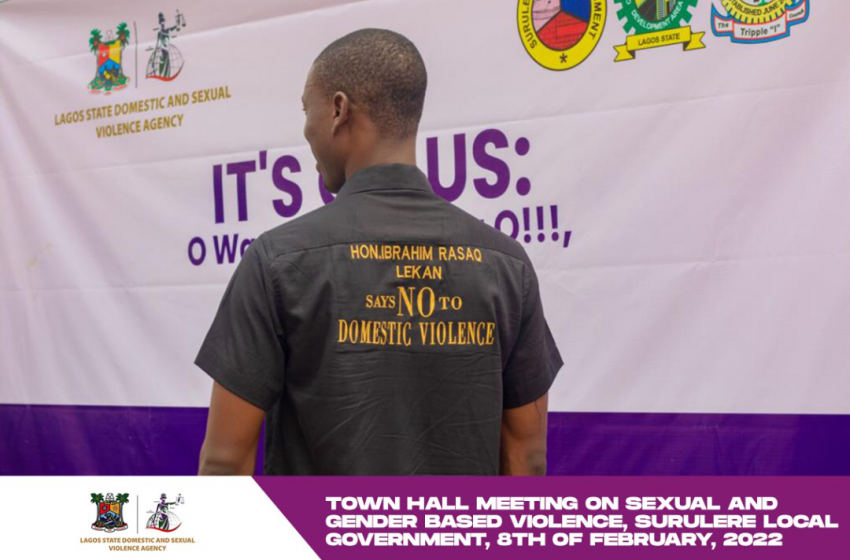 In a bid to address the rising cases of domestic and sexual violence in the State, the Domestic and Sexual Violence Agency (DSVA) has held its maiden town hall meeting tagged “It’s on Us to End Sexual and Gender-Based Violence” at Surulere Local Government.

Speaking at the event which also attracted participants from Coker-Aguda and Itire Ikate Local Council Development Areas, the Executive Secretary of DSVA, Mrs. Titilola Vivour-Adeniyi, said the concept behind the town hall meeting was to decentralise services and ensure that residents, irrespective of their location, are aware of the existence of the relevant laws as well as support services available such as medical, social services and collaboration with NGOs in their communities.

She envisaged that the community outreach would solidify partnership with Local Government authorities and create community response teams to serve as first responders, thereby opening up the referral pathway for survivors desirous of accessing justice.

Vivour-Adeniyi added that DSVA is more committed to ensuring that the administration of Governor Babajide Sanwo-Olu’s zero-tolerance to all forms of domestic and sexual violence is attained.

On their own part, the Executive Chairman of Surulere Local Government, who was represented by the Vice-Chairman, Mr. Adewale Dosunmu and the Executive Chairman of Coker-Aguda Local Council Development Area, Mr. Rasaq Ibrahim, assured participants of the Local Governments’ zeal and desire in ensuring that all relevant stakeholders collaborate to eradicate the menace of Sexual and Gender-Based Violence (SGBV) from the State.

Also speaking, Dr. Veronica Iwayemi of the Primary Health Care Board as well as DSP Abimbola Williams of the Lagos State Police Command, enlightened participants on issues related to SGBV and informed them of community resources available at their disposal.