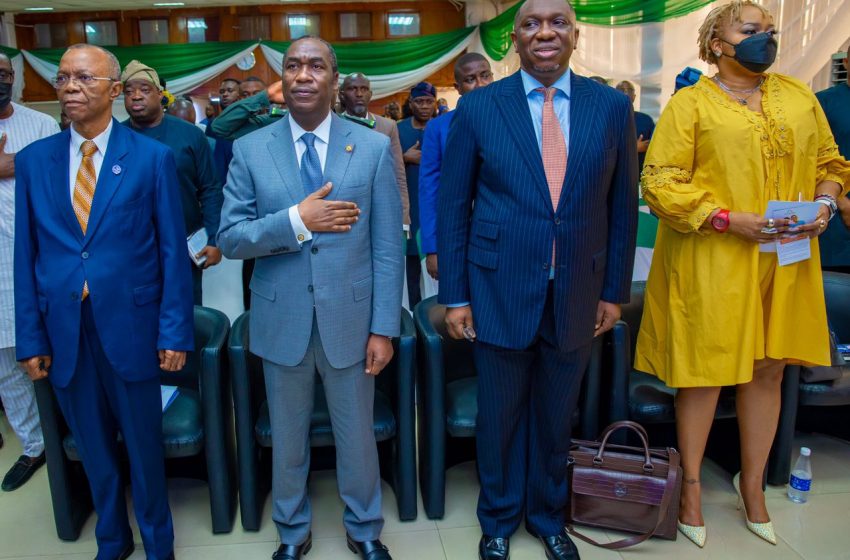 Lagos State Government through the State Employment Trust Fund has supported 3,673 businesses with the sum of N1.56 Billion as grants and provided mentorship and business advisory to young people to start and grow their businesses.

The Governor disclosed this today at the Lagos Chamber of Commerce and Industry (LCCI)/Lagos Economic Summit Group (LESG) Private-Public Partnership Pre-Ehingbeti Stakeholders Engagement, with the theme: “Building a Sustainable Future for a Greater Lagos”, held at the Commerce House, Victoria Island Lagos.

The Governor, who was represented by the Deputy Governor, Dr. Kadri Obafemi Hamzat added that the State Government has also supported 1,835 small businesses with N985 Million which has led to the creation of 10,500 direct jobs in the state, just as the Government has also invested N1 Billion into Agricultural Value Chain businesses to provide food and create jobs in the State.

He stated that the Ehingbeti Summit has continued to achieve its purpose through the meticulous and faithful implementation of innovative ideas and suggestions like the establishment of numerous initiatives which include the Lagos State Employment Trust Fund and Lagos State Security Trust Funds among others that have enhanced the standard of living of Lagosians and gave the State the enviable status as the economic nerve centre of the country.

The Governor said: “Let me confidently state here as a matter of fact that most of the key infrastructure that dots the landscape of Lagos as well as pioneering initiatives that have profoundly elevated the status of Lagos as a functional mega-city, speak to the quality of resolutions of past Ehingbeti Summits”.

Speaking further, Sanwo-Olu averred that the Lagos Chamber of Commerce and Industry (LCCI)/Lagos Economic Summit Group (LESG) Private-Public Partnership Pre-Ehingbeti Stakeholders Engagement was organised to sensitise key stakeholders on the year 2022 summit and to seek their input on the proposed 30 years Lagos State Development Plan which will be unveiled at the Summit for deliberation and final adoption for implementation.

Earlier in his remark, the Commissioner for Economic Planning and Budget and Co-Chairman of Ehingbeti Lagos Economic Summit, Mr. Samuel Egube assured that the Government will continue to collaborate with the Private Sector on the 30-year development plan and the overall development of the state in general.

He added that the Ehingbeti Economic Summit has played a vibrant role in the development of the State, noting that resolutions from past Ehingbeti Summits have brought developments such as the Ikoyi Link Bridge, BRT Project, the Red and Blue Rail Project which will commence operation soon, Lagos Free Trade Zone and the Imota Rice Mill amongst many others.

Similarly, the Commissioner for Finance, Dr. Rabiu Olowo stated that the Ehingbeti Economic Summit is about the State’s deliberate agenda for a Greater Lagos and has the absolute inclusion of the different stakeholders, adding that the State Government has fulfilled about 90 percent of the action plans from the last summit which will be reported during the forthcoming Ehingbeti Summit holding from  11th to 12th October 2022.

Earlier in his opening remark, the President of the Lagos Chamber of Commerce and Industry, Dr. Michael Olawale-Cole, represented by the Deputy President, Mr. Gabriel Idahosa stated that the decision of the Lagos State Government to collaborate with the Chamber on the 30-year Development Plan reflects government’s appreciation and recognition of the Organised Private Sector in the realisation of the socio-economic objectives of the State and Nation in general.

He, therefore, assured the State Government of the support of the Lagos Chambers of Commerce and Industry in ensuring the effective implementation of the State Development Plan, promising to enlighten the business community about the opportunities and benefits inherent in the plan and why they should be part of it.