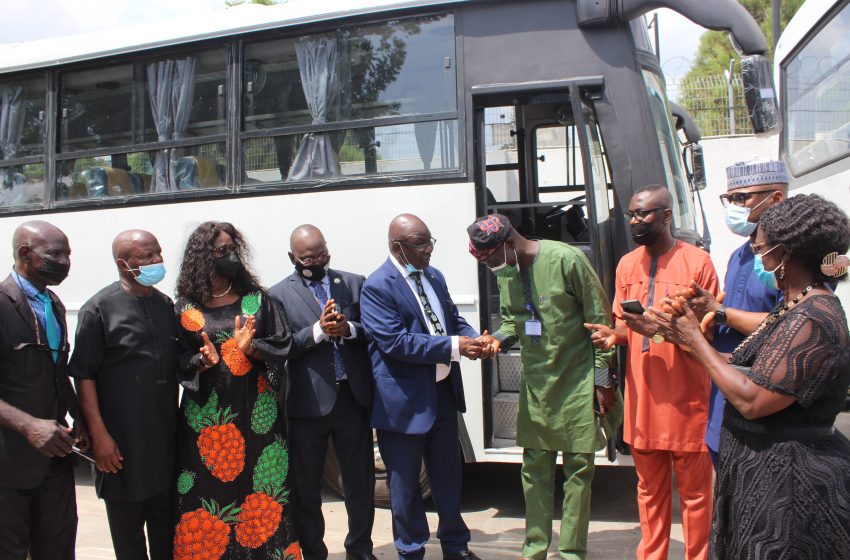 The Lagos State Governor, Mr. Babajide Sanwo-Olu, on Wednesday, approved the release and handing over of 10 brand new, 56 seater buses to Public Servants in different arms of Government, as part of his commitment to ease transportation challenges encountered by workers in commuting to and from their homes to various offices.

The Head of Service, Mr. Hakeem Muri-Okunola, while presenting the 10 new sets of buses at the Lagos House Ikeja, stated that the kind gesture of Mr. Governor is a follow up to the 35 buses allocated to the Centralised Staff Bus Scheme (CSB) a week after assumption of office, adding that the presentation, which was based on requests, attests to the commitment of the State government to priority welfare for public servants.

While presenting the buses on behalf of the Head of Service, the Permanent Secretary, Public Service Office, Office of the Head of Service, Mr. Samson Ajibade, maintained that the new buses handed over for use of the workers will further improve work standards, just as it will motivate staff to discharge their duties effectively and efficiently.

Maintaining that the new buses handed over to the public servants will ease their transportation problems, guarantee early resumption to work and improve productivity, Ajibade urged staffers to reciprocate the kind gesture of Mr. Governor because to whom much is given much is expected.

Speaking on behalf of the beneficiaries, the Permanent Secretary /Tutor General District 1, Mrs. Titilayo Solarin, appreciated the kind gesture and expressed optimism that the transportation challenges encountered by the workers while commuting to and from work will be reduced.

Solarin assured the State Government of workers’ commitment in discharging their duties, just as she encouraged workers to put in more efforts to support the T.H.E.M.E.S. Agenda.

Arms of government that benefitted from the distribution of buses include the Six Education Districts, Health Service Commission, Lagos State House of Assembly and the Lagos State Judiciary, which received two buses.

Those present at the ceremony included the Permanent Secretaries/Tutors-General of the Six Education Districts; Permanent Secretaries, Office of the Chief of Staff; Ministry of Information and Strategy; Health Service Commission; the Clerk of the Lagos State House of Assembly, and the Chief Registrar, Lagos High Court.