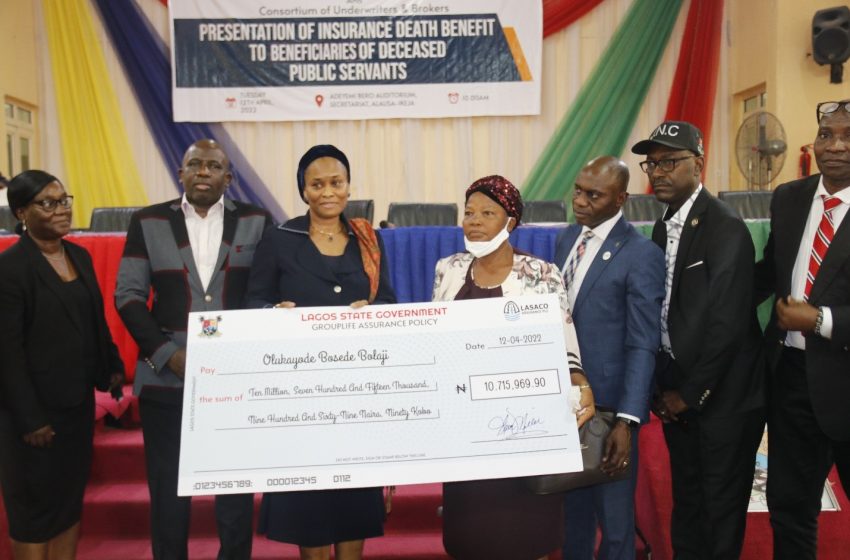 Images of Insurance Benefits payments to the families of 277 deceased staff in the State Public Service.

The Lagos State Government, in conjunction with LASACO Assurance PLC, has presented cheques worth N585,191,875.52 to 277 beneficiaries of deceased public servants, who died while in active service of the State Government.

Addressing the beneficiaries at the presentation ceremony, the Head of Service, Mr. Hakeem Muri-Okunola, stated that the payment of death benefits to the families of deceased members of staff was neither favour nor largesse but a responsibility and obligation on the part of the administration of Governor Babajide Sanwo-Olu.

Represented at the event by the Permanent Secretary, Debt Management Office, Mrs. Alake Rukayat Sanusi, the Head of Service maintained that the payment of the insurance death benefits is intended to provide succour to the families and dependents of the deceased.

He, therefore, urged the beneficiaries to ensure that the money is invested properly and judiciously used, just as the breadwinners would have wished.

On his part, the Honourable Commissioner for Finance,  Dr. Rabiu Olowo, represented by the Permanent Secretary/Accountant-General, State Treasury Office, Dr. Abiodun Muritala, appreciated Governor Sanwo-Olu for his commitment to the well-being and welfare of members of staff.

Dr. Olowo also advised the beneficiaries to put the money into productive use, particularly towards the education of the children and other dependents that the deceased left behind.

Earlier in his welcome address, Permanent Secretary Ministry of Finance, Mr. Temitope Hundogan, expressed the hope that the payment of the insurance death benefits to beneficiaries of deceased staff would serve as a financial relief for their immediate families.

He urged the families to spend the money judiciously by ensuring that the school fees of the deceased children are taken care of as well as the accommodation needs of their immediate family members.

Hundogan revealed that the highest sum that will be presented to a beneficiary is N10,715,969, while the lowest sum is N546,000 according to the Grade Levels of the deceased persons.

He enjoined the beneficiaries to invest the money productively where necessary, warning them to be wary of the activities of scammers and dubious-minded individuals who would want to entice them with mouth-watering business ventures.

The Permanent Secretary added that the State Governor had further demonstrated the fact that governance is a continuum by approving the payments.

The Managing Director of LASACO Assurance Plc, Mr. Razaq Abiodun, commended the Lagos State Government for its prompt payment of salaries of those in active service and benefits to the families of deceased staff.

He applauded Mr. Governor for continuing where others stopped in paying premiums because without paying the insurance dues it would be difficult for the insurance companies to pay death benefits to the families of deceased staff.

Abiodun emphasised that the insurance benefit payments were made possible with the prompt and consistent payment of insurance premiums by the State Government.

Also Speaking, Comrade Segun Balogun, the Chairman of the Association of Senior Civil Servants, commended the present administration on the disbursements, saying the union is engaging the State regularly to ensure smooth execution of all its plans for the entire workforce, especially on issues relating to welfare.