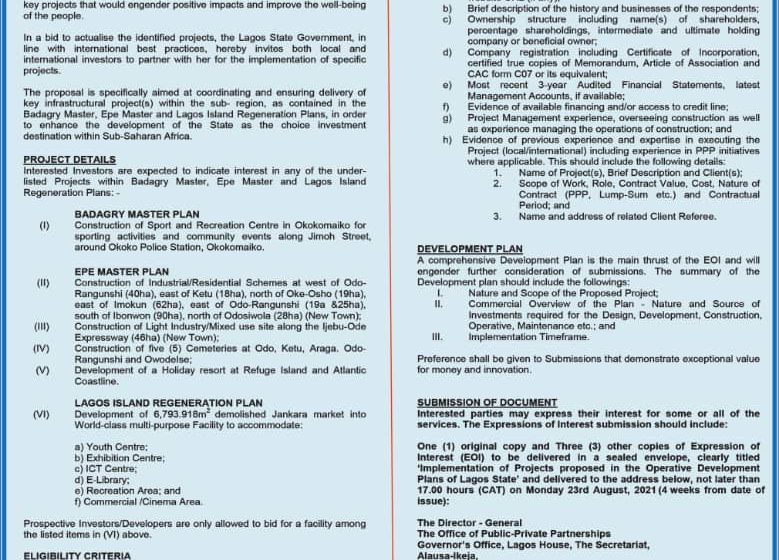 The Lagos State Government has concluded plans to execute various developmental projects of its master plans through the Public-Private Partnerships model.

The State Commissioner for Physical Planning and Urban Development, Dr. Idris Salako, disclosed this in a statement, adding that the present administration has identified key projects that would engender positive impact and improve the well-being of the people.

In his words: “The Operative Development Plans prepared by the Lagos State Government, in line with the megacity status of the State and the imperatives of achieving a livable, organised, functional and secure economic hub as indicated by the T.H.E.M.E.S Agenda, has identified key projects that would engender positive impact and improve the well-being of the people”.

He said, “In order to actualise the identified projects, the Lagos State Government, in line with international best practices, has invited both local and international investors to partner with her for the implementation of the specific projects”.

Revealing that the move would ultimately enhance the status of Lagos as the choice investment destination within Sub-Saharan Africa, the Commissioner said the initiative will ensure the coordination and delivery of key infrastructural projects within the Badagry, Epe and Lagos Island sub-regions as contained in their Regeneration Plans.

Salako listed some of the proposed projects to include the construction of a sports and recreation centre in Okokomaiko under the Badagry Master Plan; construction of industrial and residential infrastructure, including New Towns, at various locations in Epe; construction of Light Industry, mixed-use property and five cemeteries as well as a holiday resort under the Epe Master Plan.

According to the Commissioner, under the Lagos Island Regeneration Plan, the defunct Jankara market would be developed into a world-class multipurpose facility that will accommodate youth exhibition and ICT centres, e-Library, recreation, commercial and cinema areas.