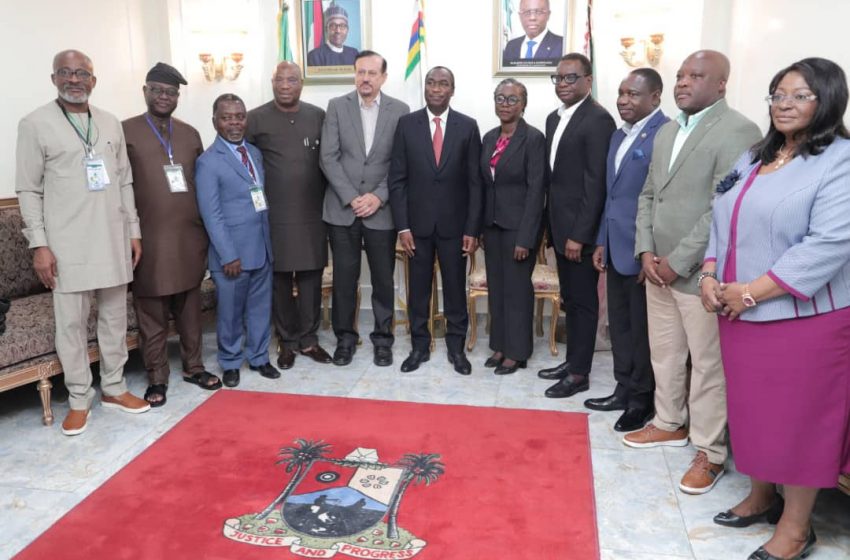 Speaking on the exploits of Haruna Quadri in international table tennis, Dr. Hamzat noted that Nigerians are doing well in Table Tennis and a lot of attention should be given to the game to get more Nigerians to emulate Quadri.

Expressing delight and pride to see a Nigerian and African emerge on the list of top 10 International Table Tennis Players for the first time, the Deputy Governor said, “We are extremely excited to see him doing well”.

He noted that the emergence of a Nigerian in the top 10 shows the quality of work the team and everybody involved has put together and encouraged others to put in more effort in winning laurels for the country, stressing that the State is ready to support and host any of the table tennis competitions organised by the Federation to ensure a successful outing.

Earlier in his remarks, the Executive Vice President, International Table Tennis, Mr. Waheed Enitan Oshodi, stated that the delegation was at the Round House to convey their sincere appreciation to the State Government for the continuous support enjoyed annually in hosting the table tennis championship.

Oshodi disclosed that Lagos has remained a strong pillar behind the development of African Table Tennis as it has in the past 10 years continued to give financial and infrastructural support to the Federation for the successful hosting of its numerous competitions aimed at developing table tennis in Africa.

Noting that such support has assisted players like Haruna Kadri to be among the best 10 in international table tennis, which is the first in Nigeria, the ITTF Executive Vice-President described the standard of sporting activities in Lagos as similar to international standards and one of the reasons important tournaments are held in the State.

Similarly, the President of the Africa Table Tennis Federation, Mr. Khaleed Wl-Salhy, stated that Lagos State has been the centre of table tennis in Africa and the environment has been conducive for developing the sport.

He acknowledged that the Federation reposed trust in the ability of the State to organise and provide facilities required by the players for a successful outing.