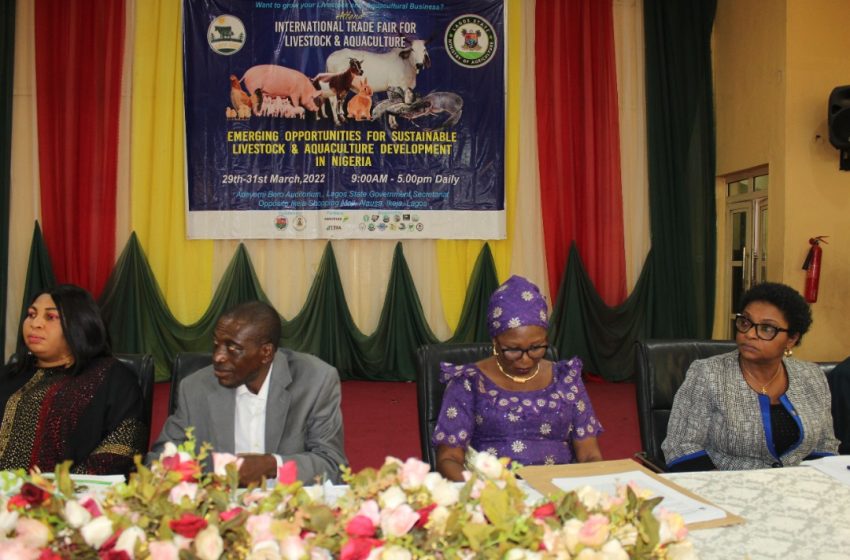 Lagos State Commissioner for Agriculture, Ms. Abisola Olusanya, has called on the private sector and multilateral donor agencies to make food systems more sustainable and resilient in the face of global food shortage.

Olusanya made the call in her address at the Y2022 three-day Livestock and Aquaculture Trade Fair organised by Linkers Continental Resources Limited, in collaboration with the Lagos State Ministry of Agriculture, at the Adeyemi-Bero Auditorium, Alausa, Ikeja, adding that global food shortage was occasioned by climate change and other social-economic factors.

In her words: “As a government, we are not relenting in our efforts to ramp up food production and processing so as to meet the identified gap, but also calling on other stakeholders to join hands with Lagos as it is a journey that cannot be embarked on all alone”.

The Commissioner, represented by the Permanent Secretary in the Ministry, Mrs. Tokunbo Emokpae, stated that Lagos State is working assiduously to make the food systems more sustainable whereby wealth and jobs will be created for the youths, industry players and primary producers.

He explained that the project would lead to economic development, food security, create more job opportunities, contribute to peace-building and reduce conflict.

His words: “If our private investors and stakeholders can tap into the livestock and aquaculture industry we have more than enough opportunities to build their investment. Nigeria is a land with large opportunities, the agriculture sector has a huge opportunity because the demand for meat and dairy products continually grows exponentially”.

“Lagos State has already indicated interest to be part of this programme and we’re going to support them once they choose the team to represent the State”, the Vice President declared.

He said: “For a nation to be a pride in the committee of nations, she should be able to feed her people. With an enabling environment, livestock and aquaculture production, she will also play a significant role towards achieving the Sustainable Development Goals of eradicating poverty and hunger”.

Co-ordinator and Team Lead of Linkers Continental Resources Limited, organisers of the trade fair, Pastor Temitope Oluwadipe said that the trade fair was designed to revitalise the livestock and aquaculture sector as well as enhance food security through the knowledge sharing of the various agricultural stockholders being brought together.